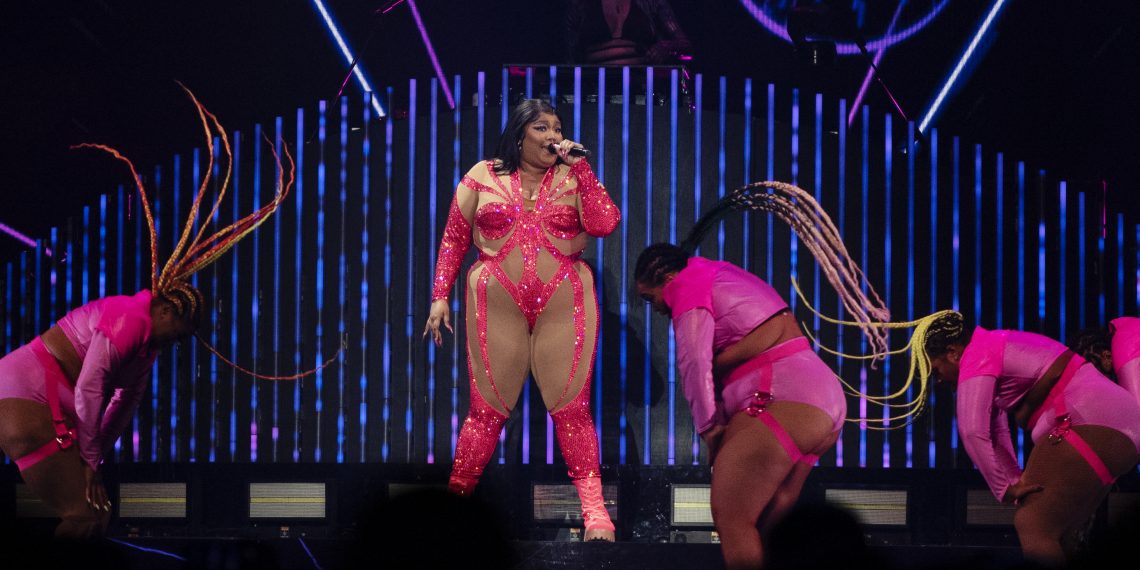 In an alternative universe, we would’ve gotten to watch Lizzo become the first woman to headline Bonnaroo in 2020 or even in 2021, but, unfortunately, Covid and Mother Nature had other plans, forcing cancelation of both years of the nearby fest (preparing for Bonnaroo was even a plot point in the singer’s Emmy-winning docuseries, Watch Out for the Big Grrrls, which aired earlier this year). No stranger to Music City, however, Lizzo made it to town quite a few times amidst her rise from beloved underground r&b singer, rapper, and viral flutist to bona fide superstar, performing over the years at spots like Nashville Pride, a late night tent at Bonnaroo, opening for HAIM at War Memorial Auditorium, and, notably, hitting Nashville three times in one year in 2019, at Cannery Ballroom then The Ryman then Municipal Auditorium, all while her breakout album, Cuz I Love You, and its inescapable string of singles, cemented Lizzo as one of music’s most essential new artists.

Three years later and with another critically-acclaimed new album to her name, Special, Lizzo made her highly-anticipated return to Music City on her first-ever arena tour, headlining Bridgestone Arena with a performance that retained all of the soul and spirit and unwavering positivity and acceptance that has long defined her, while scaling everything up with more flash and flourish and dazzling production. It was an incredible, earnest, multifaceted show, and one so epic it it’ll be hard to soon top. Read on for our rundown of Lizzo’s Nashville stop of The Special Tour (and grab tickets to any of the remaining dates, if you happen to be on the West Coast).

The excitement and anticipation for Lizzo was palpable as we entered the arena, and it was amazing to see such a huge and enthusiastic crowd piled in, especially when thinking back to some of the multifaceted performer’s more intimate local outings we caught back in the day. Latto, a buzzy up and comer in her own right, was an excellent choice to kick things off, emerging in a sparkly silver bodysuit and backed by a DJ and dancers, as she played through an energetic set of her viral (and beloved by TikTok) singles. Saving some of her biggest songs for the end of the set, the crowd got extra rowdy for tunes like “Muwop,” “Bitch from Da Souf,” and of course “Big Energy.”

After a quick changeover, it was time for the main event, and Lizzo emerged to ask “Nashville, did you miss me?” eliciting deafening applause. Clad in a sparkly bodysuit, one of serval outfits she’d wear throughout the evening, and backed by not only her typical DJ and her Big Grrrls dancers, but also a full band (resulting a stage packed with talented women), we were immediately struck by the expanded scale of this tour. And yet, despite the giant stage and catwalk and lights and massive screens, Lizzo managed to make it feel as intimate and personal as her club shows of the past, interacting with the crowd, speaking between songs more than any other arena performer we can recall, and always letting her humor and personality and positive energy command the room.

The show- which spanned more than two dozen songs, including literally every single track from Special and much of Cuz I Love You– was loosely divided into a handful of themed segments, featuring vibe and outfit changes and even a “therapy” session where Lizzo performed from a chaise lounge. Upbeat songs early in the set like “2 Be Loved,” “Boys,” and “Rumors” prompted huge singalongs and showcased the singer’s incredible vocals, and the night show felt like one giant dance party, with the most twerking, crowd participation, and soul than Bridgestone has seen in a long time. It wouldn’t be a Lizzo show with some flute, of course, and though it was well into the show before the singer’s signature instrument emerged, she delivered several impressive solos towards the end of the set (and even joked about her flute’s fame, which even has its own nickname and Instagram account).

Had she only played her songs and nothing else, it would’ve been an impressive and memorable performance on its own, but, of course, this was a Lizzo show, and she made sure it was something extra special and real. Whether bringing up a birthday girl to serenade during “Birthday Girl,” attempting to FaceTime a fan’s sister (and getting a huge laugh when she didn’t pick up), paying special attention to fans in the very back, scanning the room for outfits and signs to compliment, cracking jokes, speaking earnestly on body positivity and self-love, complimenting her talented touring ensemble, or even taking a minute to stress the importance of midterm elections, Lizzo treated the crowd like old friends, and managed to channel both the star power of an arena act and the humility of a small artist all at once.

With a winding catwalk that stretched deep into the floor crowd, the show often felt much more up close and personal than most performances of this scale, but just as easily, when the band and the dancers and lights and screens all kicked it, it would flip right back to being an impressive, gigantic affair, and one befitting of an artist who’s accomplished so much in just a few short years. Just as it felt like we’d heard every hit (and even a few great covers, like Lauryn Hill’s “Doo Wop” and Chaka Khan’s “I’m Every Woman”), Lizzo reminded us just how impressive and far-reaching her discography is with the final stretch, winding the night down with “Coldplay” (featuring an impressive flute solo), “Truth Hurts,” “I Love You Bitch,” and the song that first put her on the map, “Good As Hell,” before cranking up the party one last time for an encore of “Juice” and “About Damn Time.”

We’ve known for years just how special Lizzo is- a singular and multifaceted musical talent and also a one-of-a-kind person who transcends celebrity- and with her album and tour of the same name, it was a thrill to see her showcase what makes her so Special at this grand, impressive scale of performance. A lot of artists can play arenas, but Lizzo was made for this, and though we still hope to see her headline Bonnaroo someday, her first outing at Bridgestone more than made up for the last few years of eagerly-awaiting the singer’s return to Nashville.