by Philip Obenschain
in Features, Shows
0 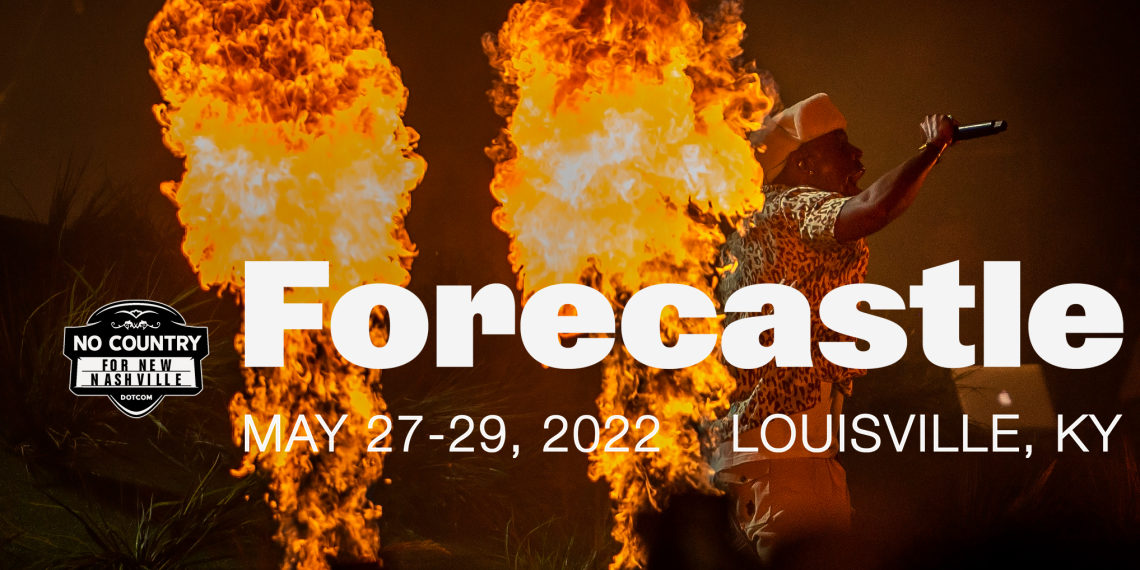 It’s been almost three years since we last covered a major music festival, after nearly a decade of attending several each and every summer. While last fall’s rescheduled then subsequently rained-out Bonnaroo was our planned return to live coverage, getting to do so a little later in the pandemic, in a year that feels a bit closer to normalcy (despite yet another current Covid surge), and at a more intimate fest was a perfect way to jump back in, and to kick off our first full festival season since 2019.

Louisville’s Forecastle Fest has long been one of our favorites to attend each year, and one of the few regional happenings we never skip. It’s a bit smaller and more manageable than similar events like Bonnaroo, but still boasts a fantastic and well-curated lineup each year, and its well-organized, conveniently laid-out, and picturesque downtown city setting makes it such a smooth and easy festival to attend. During its two summers off, Forecastle, initially founded in 2002, underwent a bit of a revamp, modernizing its aesthetics and streamlining it focus, with this year’s lineup paired down to three stages (removing the smallest stage and a DJ-centric Party Cove) and boasting a very current lineup heavy on indie rock, hip hop, pop, and EDM.

Nothing about Forecastle 2022 felt dramatically different on the surface, but the newer, more contemporary vibe certainly attracted a bit of a younger, Gen Z-skewing crowd this year, and the smaller festival site made hopping between stages a breeze. Historically situated under the highway overpass, the electronic-geared Ocean Stage was moved to where the secondary Boom Stage once stood, while the Boom Stage was situated next to the overpass, much closer to the main Mast Stage (making crowd movement between the two more similarly-programmed stages a lot easier). Otherwise, the vibe and offerings of the park were much the same, with great vendors and some cool activations (we particularly dug the Liquid Death Country Club).

Formerly a July event, the new Memorial Day Weekend timeframe was a welcome (and perhaps the most significant) change, not only because it puts Forecastle ahead of some of the bigger, longer events coming up, but also because it meant much better weather (there’s a reason not as many festivals happen in July and August). And though we’ve heard rumblings of lower music fest attendance across the board this summer, Forecastle’s focus on quality over quantity and gearing to a specific demographic instead of trying to be everything for everyone seemed to have paid off, as crowds appeared pretty sizable each day.

Arriving just in time to settle in and grab lunch downtown, it felt especially lovely and sentimental to be back, after a few summers absent not only of music fests, but with very little travel in general. Visiting Louisville is something I greatly look forward to each year, and at this point I have a handful of restaurants, coffee, and shops I always make a point to frequent each trip. It reminds me of how Nashville first was when I began visiting in the 2000s before moving, and I’m glad to see that while Louisville continues to get cool new spots between each visit, it doesn’t seem to be getting overtaken by growth in the same way Nashville did.

Parking and getting into Forecastle is always a breeze, which is rarely the case for fests in urban settings, and we arrived just in time to kick off our weekend with Nashville’s own Charlotte Sands. It’s been so awesome to watch Charlotte blow up recently, especially with the emo and pop punk crowd, and watching her kick off Forecastle from the main stage felt fitting for her amazing year (she just opened for My Chemical Romance in the UK days before, and played two more national fests the same weekend). Backed by only a drummer, Sands brought the afternoon crowd to life with electrifying renditions of favorites like “Bad Day,” “All My Friends Are Falling in Love,” and, of course, her breakout “Dress,” and left us pumped for the weekend ahead.

The way the Mast and Boom stages were scheduled this year was extremely convenient (especially if you’re not as passionate about the EDM stuff on the Ocean Stage) with no overlap at all; one artist ends and the next began, and next up was alt/indie rocker Indigo De Souza. I was a little late on the Indigo bandwagon, but I absolutely adored last year’s Any Shape You Take, and this was my first time seeing the Asheville-based artist live. With a really great band and looking extremely rock and roll in all black and donning a Tyler, the Creator shirt, De Souza performed with an effortless cool, bringing to life her earnest and relatable songs- a very soulful and grungy take on indie rock- in a way that felt like throwback to the guitar band domination of a years past, but also in line with the contemporary alternative, confessional singer-songwriter landscape. A bit of rain at the beginning of her set would, thankfully, be some of the only bad weather of the weekend.

The last time I saw Duckwrth, several years ago, he was playing at Bonnaroo’s smallest tent, with a teenage Billie Eilish going absolutely mental watching side stage. He’s gained not only in popularity since, but has also pivoted his style quite a bit, adopting a more industrial, dance-primed, and propulsive sound with recent efforts. His personal style is also wildly cool; if Forecastle had a best-dressed award, he’d be a strong contender. The crowd was starting to look impressively full by the time Duckwrth took the stage, and with his intense and energetic delivery, he set the bar high for the rest of the day.

It’s been years and years since I’ve seen Earl Sweatshirt, and as a fan from all the way back in the Odd Future days, his was the performance I was most looking forward to on Friday. I have to say, after the frenetic set from Duckwrth, it took me a minute to get on Earl’s more chill (and, seemingly, very stoned) wavelength, but once I locked in with what he was doing, I had a lot of fun. With just a DJ and a very loose and informal stage presence, it felt like a callback to old school hip hop. To my delight, he pulled heavy from 2018’s Some Rap Songs with cuts like “Riot!” and “Ontheway!,” and a course dropped in plenty from recent LP SICK! Forecastle has always been solid on booking hip hop, but this year was a particularly lineup!

Nashville’s own COIN are a group we’ve watched grow from their earliest Belmont days, and it’s always a thrill to see them play big festival sets. I sometimes forget just how huge and well-known there are these days, and loved seeing how packed and enthusiastic their crowd was, singing along loudly with every tune. Thanks to a prolific past few years, the trio actually have a lot of new music out that I’ve never seen them play live, and watching a lot of cuts from newer efforts Dreamland and this year’s Uncanny Valley, it’s clear just how much they’ve grown as songwriters and performers. Energy was high (singer Chase Lawrence was the first artist of the weekend I saw end up in the crowd), their stage was super cool (very bright and colorful with creative lights), and every song erupted into a hook-laden crowd-pleaser. I’ll forever be incredibly proud of this band!

I’ve been waiting years to see Clairo, and despite having the rainiest set time of the day, she was absolutely transcendent (and one point she even rocked a poncho in solidarity with those toughing out the weather to watch). Looking straight out of the ’90s and backed by a really talented and surprisingly soulful band, the breakout young bedroom pop singer started out her set on piano before moving to guitar. Opening with her latest album’s opening track “Bambi,” she played a perfect mix of cuts from Sling and her breakout debut Immunity, and even some older fan-faves like “Pretty Girl.” Clairo got really big really quick, and though I’m sure she was great a few years ago, it felt like watching an artist who’s had some time to mature and fine-tune both her sound and live show. Everything about this performance was so warm, charming, captivating, and effortless. I hope I can see her at some point in a more focused and intimate spot like The Ryman, but even at a festival setting, Clario was one of the absolute high-points of the weekend.

I only managed to watch a little bit of Still Woozy, but I look forward to seeing him again soon at Bonnaroo. The indie pop singer’s sound and style is such a fantastic vibe, and everything from his set decoration (lots of astroturf and plants, which echoed Tyler, the Creator’s later in the weekend) to his groovy, energetic, and genre-bending songs, to his wild show (he spent quite a bit of time into the crowd) was so perfect, especially as the sun fully set.

I’ve seen Jack Harlow several times before, including at this very fest, as a much smaller artist, and he’s always been solid, but, still, I was curious to see how the Louisville native would work as a headliner, after breaking out in a major way during the pandemic thanks to hits like “Whats Poppin” and Lil Nas X collab “Industry Baby.” No matter your opinion of his performance (I dug it), there’s no denying he had one of the dopest festival entrances ever, emerging on top of the impossibly tall stage (among the tallest I’ve ever seen at any festival, apparently built extra-high this year to accommodate Tame Impala’s lighting rig) alone to open with “Talk of the Town,” the opening track on his latest, Come Home the Kids Miss You. During the several minutes it took to get him down, an extended montage of footage played of Harlow as a young up and comer, performing around Louisville and beyond and he hustled for years before becoming a star. It set the tone for a really special and sentimental hometown show, and the gravity of it all certainly wasn’t lost on the rapper (he mentioned having snuck into the fest as a teen, and specifically having Forecastle in mind while working on some of his latest material). Unsurprisingly, the setlist pulled mostly from his two most recent, commercial breakout LPs, but as someone who really dug his independent mixtape days, I wish he had thrown in a bit more old stuff for the hometown crowd. I can’t deny how many bangers he’s churned out lately though, and Jack definitely got the crowd hyped up and singing along with every cut. Though, admittedly, I was more excited for the weekend’s other headliners, I felt like Harlow definitely held his own and did Louisville proud, proving that his recent stardom was most definitely earned.