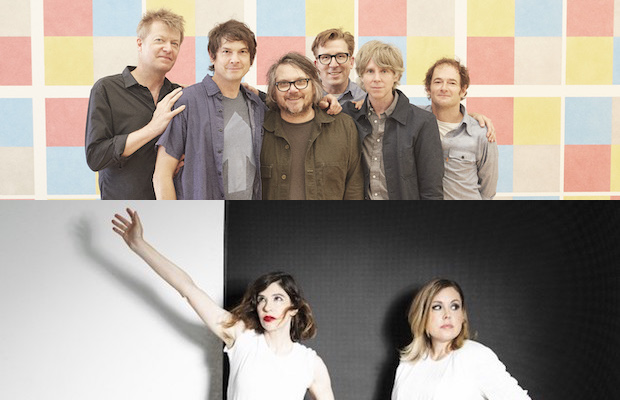 Two acts who both made their way to Nashville for the first time in several years last year, Wilco and Sleater-Kinney have announced a co-headlining summer tour, which brings them both back sooner than expected to headline Ascend Amphitheater on Aug. 16!

Celebrating their first album in three years, last fall’s Ode to Joy, Chicago alt rockers Wilco (who headed up the Grand Ole Opry House late last year) have become one of the most beloved and dynamic acts of the last 25 years, churning out a steady and beloved breadth of work which has seen them waver from folk to more indie geared rock over the years. Meanwhile, seminal Washington punks Sleater-Kinney spent almost a decade apart after a seminal early run in the ’90s and ’00s, returning in 2014 and since releasing two LPs, most recently last year’s The Center Won’t Hold (in support of which they played The Ryman last fall, just one day after Wilco’s Opry stop), which notably saw the departure of longtime drummer Janet Weiss.

Though distinctly different, both bands can trace their roots back to the punk scene of the late ’80s and early ’90s, and rose to acclaim around the same time. Even the name of the tour, It’s Time, suggests a long-time mutual admiration between the two groups (notably, Wilco’s Jeff Tweedy and Sleater-Kinney’s Carrie Brownstein have both found fame beyond their respective bands, in acting, authorship, collaborative and side ventures, and more), so while a bit unexpected, they make for one of the coolest summer pairings of the year.

Tickets for the groups’ Nashville stop, which feature support from NNAMDÏ, are set to go on sale this Friday, March 13 at 10 a.m. CDT right here, which pre-sales underway now using the code ‘ODE’!