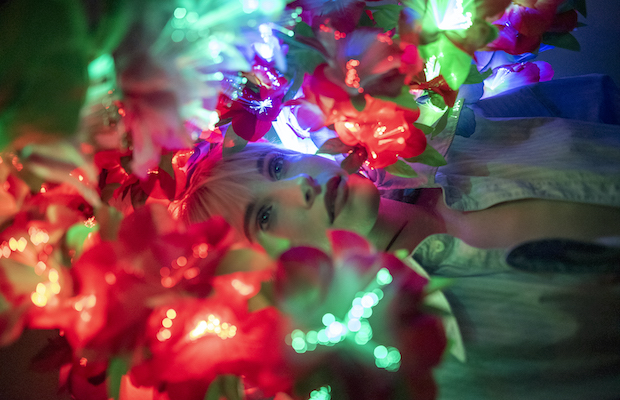 Since winding down a lengthy, world tour cycle in support of their stellar (and career-best) 2017 fifth LP After Laughter, a run which ended with an epic, hometown celebration dubbed Art + Friends in late 2018, acclaimed Nashville alt rock outfit Paramore have been understandably quiet. At the time, singer Hayley Williams told us in an interview that Paramore had no update on what would come next because they genuinely didn’t know, and planned then to take a well-earned breather (and to focus on personal ventures like drummer Zac Faro’s other band, HalfNoise, and Williams’ successful hair dye company, Good Dye Young). While we have no doubt that Paramore will be back and reenergized eventually, with Williams’ recent reveal of plans to release her first ever solo LP, Petals for Armor, in May, it’s clear that this latest musical venture is what’s been occupying the singer’s time as of late.

Following a few weeks of teases beginning in late December, Hayley made her debut with a brand new music video and single, “Simmer,” last week- a personal and distinctive tune, channeling an almost Radiohead-like frenetic groove juxtaposed with piercing and hypnotic vocals and Williams’ singular spirit of delivery, thematically a reflection of a fraught and intense personal navigation of rage the temptation to succumb to it. Like the song, the accompanying video is a dazzling, new embodiment of Williams’ musical expression as a solo artist, not a far-step from the personal perspective she imbued in Paramore, but free of any preconceived boundaries or notions of how it should or could be presented.

Not long after “Simmer,” another video (sans accompanying single) appeared, dubbed the “Simmer Interlude,” and teasing a followup, ending with Williams’ monster movie-esque creature from the first video wrapping her human form in a sort of giant cocoon. A cliffhanger like that surely warranted a quick followup, and Hayley delivered today with another new single and music video- “Leave It Alone”

Like “Simmer,” “Leave It Alone” gives off some definite Radiohead Kings of Limb era energy in its production and arrangement, though, tonally, it’s a much more soft and subdued track than her last, a lush, string-filled, and powerfully harmonic single that leaves us even more eagerly anticipating the album. Much how the video continues a narrative, so too does the song’s thematic focus, an apparent self-reflection on vulnerability and maintaining human connection while also processing and rebuilding from grief and trauma. It’s clear that, as on Paramore’s After Laughter, Williams is ready to open up in her most confessional and cathartic fashion ever, and we have no doubt that Petals for Armor will be her most personal and raw work to date.

If, in the original video, Hayley’s human form was meant to be fleeing through the forest to escape rage, trauma, conflict, and past strife, only to be ambushed by a darker, more calloused version of herself lurking in the shadows of her escape, “Leave it Alone” is the convergence of those dual states of being, where her darker, hardened self literally captures and cocoons her fleeing and exposed self, only to emerge as both a tougher, more nuanced being whose shell and calluses are still there, but whose vulnerability and softness and spirit of her past self is blooming through again, finally giving way to the restoration of her whole self.

As with “Simmer,” “Leave It Alone” was produced by Paramore guitarist and creative collaborator Taylor York, with co-writing and instrumentation from the group’s live bassist Joey Howard. Additionally, Aaron Steel, Daniel James (of Canon Blue fame), and Benjamin Kaufman contributed to the track, with Warren Fu once again helming the fantastic video, with production from Whitney Jackson, cinematography from Thomas Banks, and creative direction from Lindsey Byrnes (you can find more technical credits as well in the video’s description).

What’s next for this solo chapter of Williams’ career reminds to be seen, but with an album on the way, we’d imagine some shows might not be far behind (especially since she had a habit of intimate hometown warmups with Paramore). We’ll surely update you if we learn more. One confirmed item on the calendar we can share, however, is Hayley’s return to Bonnaroo in June to curate her Sanctuary of Self Love plaza for a second year- definitely exciting news whether or not it might include a performance.

For now, watch “Leave It Alone” below, and keep an eye on the site for updates ahead of Petals for Armor‘s release this May!