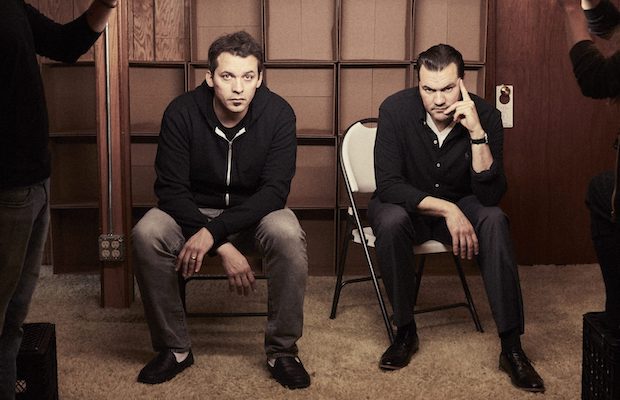 Officially a duo, though often mistaken for a single rapper, Minneapolis group Atmosphere are made up of rhymesmith Slug (Sean Michael Daley) and DJ/producer Ant (Anthony Davis). Originally formed in the early ’90s by Slug, along with some other high school friends/members who have since left the group, Atmosphere began to pick up steam and trace their official origins to the mid ’90s, and are co-founders of tastemaking indie rap label Rhymesayers. Though early albums and EPs found an audience at the underground level, and the duo’s relentless touring earned them a rabid fanbase, it was arguably 2002’s God Loves Ugly that really helped Atmosphere break through with wider appeal, and, with 2003 followup Seven’s Travels, co-released by punk label Epitaph, they managed to find a new niche. The years since have seen Atmosphere become a legendary fixture in underground hip hop, paving the way for other substance, introspective, meaningful, and unique artists, all the while touring regularly, becoming regulars on the festival circuit, and continuing to release albums at a prolific clip, most recently last month’s brand new effort Whenever.

Whether you discovered them through the ’00s punk scene (they were Warped Tour favorites back in the day), the underground hip hop world, the thriving Minneapolis music scene, or simply through the strength on their music alone, Atmosphere are a compelling and seasoned act with an incredible live show, and a refreshing foil to much of what’s happening in mainstream hip hop. Tonight, Jan. 29, the group return to Nashville, for a performance at The Cowan at Top Golf with fantastic hip hop underground favorite, The Lioness, soulful singer-songwriter Nikki Jean, and DJ Keezy, all Minneapolis fixtures in their own right. Don’t sleep on this one; grab tickets here while they last!

Atmosphere, The Lioness, Nikki Jean, and DJ Keezy will perform tonight, Jan. 29 at The Cowan. The show is all ages, doors open at 7 p.m., and tickets are available to purchase for $25.