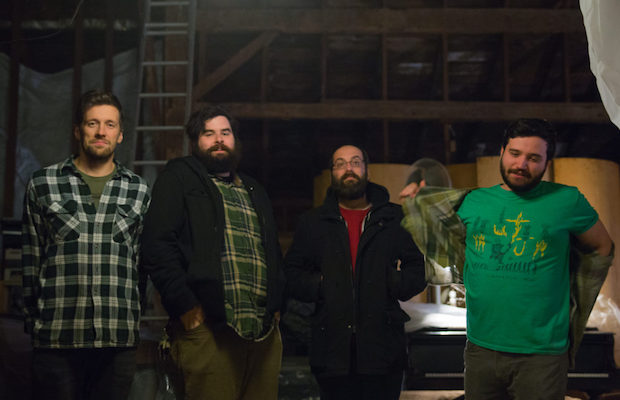 Since first coming together as a full band (and, for a few years prior, a solo project) around a decade ago, Boston formed and, more recently, partially Nashville based, genre-bending indie, post-punk, and noise rock outfit Pile have become something of critical darlings, DIY icons, and a band other bands love to love, all while hovering just out of the mainstream bubble and retaining their experimental punk roots. No strangers to Music City, even before several members resided here, the band released not only their best, but surely one of the year’s best albums in general with their latest, Green and Gray, and will return to town tonight, Dec. 21 to headline Exit/In in support, marking their last show of the year. A testament to their ties to the local punk and indie underground, the supporting lineup is absolutely stacked, with hardcore group Thirdface, indie pop outfit Only, and hardcore punk newcomers ENGINEIX all tapped to perform. Perhaps the last essential show of the year for fans of thoughtful, genre-bending, earnest punk and indie, tickets are still available right here while they last, and you can read on for more about the show!

Formed in 2007, initially as something a solo outlet for Boston punk scene veteran Rick Maguire, genre-bending and fiercely beloved group Pile have, over more than a decade, grown from fiercely DIY roots to become something a a breakout critical success, a group with a devoted and atypically passionate fanbase, and something of “your favorite band’s favorite band,” delighting and confounding fans and critics alike with their unwillingness to conform to a singular sonic identity, and their sustained growth in popularity at a time when many of their peers, and rock as a whole, have seemed to fade. Pile’s two earliest LPs, 2007’s Demonstration and 2009’s Jerk Routine, were largely performed and recorded by Maguire alone, intentionally leaning into influences of classic country, blues, and folk music, infused with his punk, post-punk, noise rock, and indie sensibilities in a conscious effort not to just become another solo emo performer. By 2010’s Magic Isn’t Real, Pile had grown into a louder, more rock rooted, conventional band, with the addition of drummer Kris Kuss, guitarist Matt Becker, and bassist Matt Connery, soon becoming a seminal part of the Boston (and specially Allston) punk scene, leading to their singing with then-new (and now incredibly renowned) indie label Exploding in Sound, ahead of their 2012 breakout effort Dripping. The subsequent few years would see Pile tour the globe, attracting both critical buzz and admiration for their incredibly dedicated fans (leading to many a confounded think piece trying to dissect their rising appeal) and attention outside of the DIY punk and indie scene, boosted by 2015’s You’re Better Than This, and firmly cemented on their lauded 2017 sixth LP A Hairshirt of Purpose, released around the time they also cut a live record at Third Man. And after a decade of experimenting with and maturing their nuanced, layered, genre-bending, and punk spirited sound, the band of now-30-somethings crafted their most reflective, deliberate, well-honed, and artistically representative album to date with this year’s seventh and most recent LP, Green and Gray, the first to feature new guitarist Chappy Hull and bassist Alex Molini after Becker and Connery departed last year, and the first since Pile adopted Nashville as something of a second home base. They’ve been no strangers to Music City over the years as performers, but Pile are more visible, vibrant, and essential than ever, and their last show of 2019 promises to be one of the coolest ways you can wind down the year and decade.

If you’re dialed into the local punk scene, and/or you frequent DIY fests or shows at spaces like Drkmttr, you might already be familiar with local relative newcomers Thirdface. The band first came onto our radar last year with the release of their EP A Demonstration of Righteous Aggression, and have been popping up on bills (and, seemingly, touring the country) ever since, channeling the sort of fast, intense, old school hardcore punk we always have a soft spot for. They’re certainly much heavier and more hardcore than Pile (though Pile have been known to take their sound into surprisingly heavy territory at times, making this pick for a support one that still makes sense), but if you’re a fan of punk and local punk on a broad level, you definitely need to know ’em.

Local synth-soaked garage rock/indie pop outfit Only have been a growing fixture in the Nashville scene for several years now, increasingly popping up on DIY bills, and making a splash with 2017’s Language EP, following several years of singles and demos. Formed in early 2015, the band were originally a trio, made up of brothers and lifelong collaborators Bryan and BJay Moore, and Bryan’s college friend and bandmate from prior projects, Evan Hickman. Enlisting Josephine Moore (no relation to the brothers) after briefly backing her solo project, Only’s lineup was cemented ahead of Language. This summer eponymous debut full-length, however, truly feels like the sound the group have long been working towards, performing a jangly, poppy, indie rock and landing as one of 2019’s best local releases, bar none. Though very different from Thirdface, we can also see how Only connect to Pile’s complex musicality, and their addition only further expands the strength of their impressive local lineup.

Though we’ve seen their name pop up on bills at Drkmttr in recent months, we don’t know much about apparent new local group ENGINEIX. They released an EP back in the summer, however, and its raw, scrappy, hardcore sound is enough to pique our interest and recommend that you arrive early!