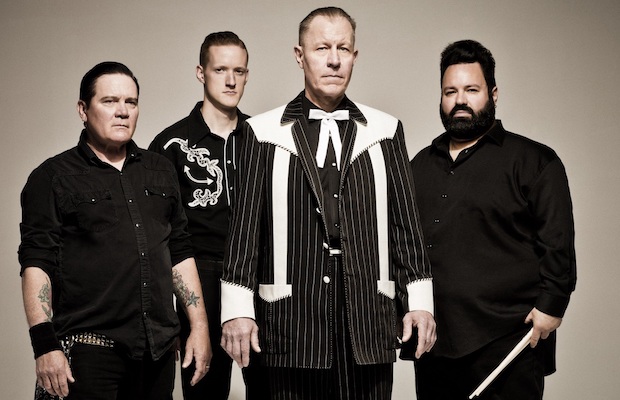 For a few years running, seminal Dallas psychobilly outfit Reverend Horton Heat have marked the holidays with a special string of Horton’s Holiday Hayride shows, getting into the spirit with a stacked lineup just as acclaimed and complimentary to their punk roots. The band are set to bring the tour back to Music City Dec. 18 for a stop at Cannery Ballroom, joined by west coast ska punk favorites Voodoo Glow Skulls, Japanese garage rock trio The 5.6.7.8.’s, and country folk singer-songwriter and former Blasters frontman Dave Alvin. An essential lineup for any fan of retro punk, rockabilly, ska, garage rock, tickets are still available right here! However, we’re exited to announce that we’re also giving away a pair of tickets to one lucky fan, so if you’d rather try your luck, read on for more about the show and enter for a chance to win below!

Heralded as one of the pioneers and architects of the rockabilly and punk fusing psychobilly genre, Dallas outfit Reverend Horton Heat are, undeniably, one of the most beloved, influential, and longest running acts in the scene. Founded by frontman and creative constant Jim Heath (who also goes by the stage name Reverend Horton Heat, though it refers to the group as a collective as well), who grew up on blues, rockabilly, swing, honky tonk, and big band music, and cut his teeth for years in ’50s inspired cover bands around Texas, before taking his sound in a more punk inspired direction, it was around the mid’-80s that he formally adopted the moniker and initial sound, immediately attracting a cult following around Dallas. After assembling a backing band and attracting continued buzz for their unique sound, punk spirit, and wild live shows, RHH attracted the attention of Sub Pop (already a hot label, but about to the most important indie in the world thanks to Nirvana), who released their debut LP, Smoke ‘Em If You Got ‘Em, in 1990. By the middle of the decade, the band, who attracted praise from legends like  Johnny Cash and Carl Perkins, toured in support of the likes of Soundgarden, ZZ Top, The Cramps, Social Distortion, and the Sex Pistols, and took out then up-and-comers like Hank III and Marilyn Manson, had inked a deal with Interscope Records, and had achieved some impressive commercial success (especially considering that psychobilly as a whole has always been a somewhat niche subgenre). The decades since have seen lineup changes, the occasional experiment in sound (more county, more punk), some solo endeavors (and even some acting turns from Heath), and a return to the indie label world, but now 12 LPs (the most recent, a piano infused effort Whole New Life, dropped just last year) and nearly 35 years in, Reverend Horton Heat have undeniably settled into their legacy as one of the most consistent, beloved, and prominent psychobilly acts in history, crossing over between the genre scenes that fueled their influence, finding new ways to reach wider audiences (video game and media placements among them), and remaining a fantastic and captivating live act, who you absolutely must experience in person!

Another long-running, genre-bending, punk scene staple, ska punks Voodoo Glow Skulls formed in the late ’80s in their native Riverside, California. Brothers Frank, Eddie, and Jorge Casillas (plus friend Jerry O’Neill) made up the initial core lineup, fusing punk, metal, ska, and, most uniquely, Latino swing music, as they added a horn section and honed their sound during a few years in the DIY punk scene. 1993 debut LP Who Is, This Is? helped the band reach a wider audience, and led them to a deal with famed punk label Epitaph (and later, Victory Records), making them a staple of the scene at a time when Warped Tour was booming and ska punk was having its most mainstream moment ever, leading to shows with the likes of  311, The Offspring, and No Doubt. Though their output more recently has slowed (it’s been more than seven years since we got a new full-length), and the lineup has changed a bit (most notably, singer and founder Frank Casillas retired from the band a couple years ago, and has been replaced by Death By Stereo’s Efrem Schulz), Voodoo Glow Skulls remain an essential and enduring act for ska fans, and one of the more unique acts of the ’90s ska scene thanks to their adventurous sound.

While, for many westerners, their first introduction to Japanese garage punk trio The 5.6.7.8.’s likely came from their cameo in Quentin Tarantino’s 2003 film Kill Bill Volume 1, the band had, by that point, already existed for nearly two decades, and had managed to find international success thanks to their retro fusion of surf, rockabilly, garage rock, and punk. Founded in the mid-’80s in Tokyo by sisters Sachiko and Yoshiko “Ronnie” Fujiyama, who’ve remained the band’s creative constant, The 5.6.7.8.’s are heavily influenced by music from the ’50s-’80s (apparently the inspiration for their name), particularly American rock and roll music, from which they pull a broad repertoire of covers, in addition to original Japanese language tunes. Though they command the widest following in their native Japan, the trio have, over the decades, toured China, Australia, and throughout North America, building a wide following thanks to a series of great albums, spanning from their 1991 debut The 5.6.7.8’s Can’t Help It! to 2014’s Tanuki Goten. No strangers to Nashville, the group even recorded a live album a few years ago at Third Man, and return intermittently to showcase their wild and nostalgic live show.

The former frontman of acclaimed roots rock group The Blasters, and a one-time member of X and The Knitters, Southern California native and long-running singer-songwriter Dave Alvin is, like the rest of the bill, an acclaimed, genre-bending, road worn staple of a certain segment of the punk scene. Despite his work with a string of influential bands, and in addition to work in film, poetry, production, and collaborative outings, Alvin has commanded a strong solo career as well for over three decades, largely drawing influence from folk rock and country, complimentary to, but not directly directive of his work with more punk leaning bands. A perfect choice to get things started, you’ll definitely want to make a point to arrive early!

Winner will be announced Tuesday, Dec. 17 at 12 p.m. CST, and will receive one pair of tickets. Good luck!