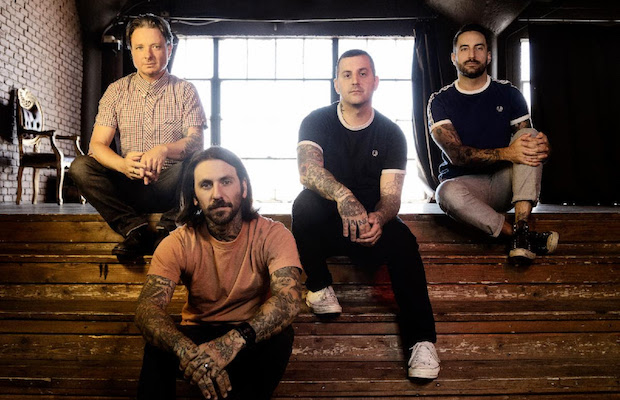 Named for the Bayside neighborhood of their native Queens, New York, Bayside, who are also now partially Nashville based, formed in 2000 and, due to swift underground buzz, inked a deal with Victory Records ahead of their breakthough debut effort, 2004’s Sirens and Condolences. The band’s eponymous followup a year later would further help cement them as a scene staple, since finding a legacy as a classic effort of ’00s pop punk, and set them on a course to embark on increasingly high-profile tours, including numerous stints on Warped Tour, landing a dependable cult following. While their early sound was rooted in punk rock and emo, Bayside have proven adventurous and versatile, gravitating towards a more alternative and even indie rock sound over the years, and their latest and eighth album, Interrobang, is no exception. Released just last week, Oct. 4, through Hopeless Records, and produced by Cameron Webb, the record manages to both be the heaviest rock record of the band’s career, while also incorporating some of their catchiest, most melodic hooks ever, resulting in yet another excellent, late career effort from a band we’ve long been fans of.

While they just hit The Cowan earlier this year on an acoustic tour, and don’t currently have another Nashville date on the books, frontman Anthony Raneri and guitarist Jack O’Shea are showing their adopted city some love and celebrating their latest release with a free, all ages in-store performance today, Oct. 9 at Grimey’s! Music starts at 6 p.m., and afterwards the band will be hanging to meet fans and sign records. Per usual, it’s free to attend, but if you want to score a wristband for the signing, you’ll want to snag a copy of the album on vinyl or CD at the store or online!

Bayside will perform today, Oct. 9 at Grimey’s. The in-store is all ages, begins at 6 p.m., and is free to attend.

[NO COUNTRY PREMIERE] Elijah Newman & The SideEffects Return with Reflective New Single and Video, "The Flipside"