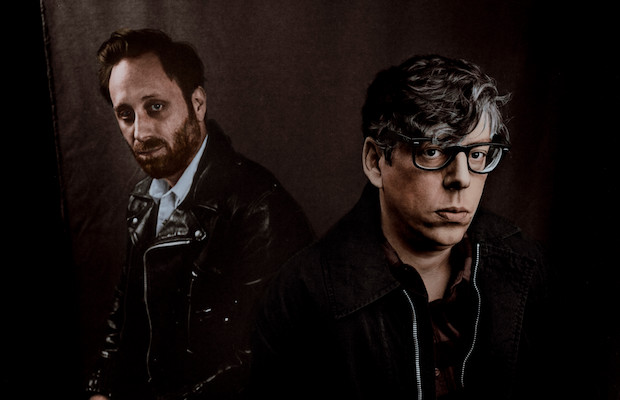 Though they never official split, Nashville based, Ohio formed garage and blues rock duo The Black Keys spent much of the last four years on hiatus, taking a breather and pursuing solo music and production endeavors after following a whirlwind several years beginning at the start of the decade, which saw the band break out into massive, mainstream success, release a string of hugely well-received LPs, nab Grammys, headline arenas, and top festival bills. Back with an excellent ninth LP, ‘Let’s Rock,’ the Keys are out on their first tour back, and set to headline Bridgestone Arena, where they last played Nashville in 2014, this Tuesday, Oct. 1, along with beloved indie rock outfit Modest Mouse, and, excitingly, longtime site faves *repeat repeat! Perhaps the must-see arena show of the fall, tickets are still available right here while they last; don’t miss out!

Formed in 2001 in their native Akron, Ohio, The Black Keys‘ Dan Auerbach and Patrick Carney had been friends from childhood, attending the same school and both hailing from musical families, and informally jammed for a number of a years before a fortuitous recording session prompted them to start a band together. Heavily influenced by blues rock, as well as classic rock and punk, the duo’s raw, DIY garage rock sound and early self-recorded efforts helped find them a cult underground following and early critical praise, landing indie label deals for their initial full-length efforts, The Big Come Up, Thickfreakness, and Rubber Factory, released been ’02 and ’04. As early buzz began to grow and the band began to both tour more regularly and license their music (something that has been instrumental in helping them reach wider audiences over the years), the Keys landed a major label deal with Nonesuch ahead of their 2006 fourth LP Magic Potion, increasingly becoming a festival fixture, landing on countless year-end lists, and sharing the stage with more high-profile acts. It was 2008’s Attack & Release, their first time working with an outside producer (and the start of an ongoing partnership with Dangermouse) and first time recording in a formal studio, however, that helped jettison the band to higher critical and commercial success, with chart-topping, Grammy winning, certifiable breakout followup Brothers, in 2010 (released around the time they adopted Nashville as their new hometown), truly making them a huge, beloved, household name. Swiftly crafting another chart-topping, energetic followup, El Camino, in 2011, The Black Keys then embarked on their first headlining arena tour, managing to retain the scrappy, garage rock ethos and underground acclaim of their early years and balance it with their newfound status as one of the garage rock revival’s biggest acts. Several years of headlining festivals, touring the globe, and racking up awards would follow, and by 2014’s more melancholy, psychedelic effort Turn Blue, it seemed clear that the band had reached peak saturation, making their subsequent hiatus the following year an unsurprising turn. In the four years since, Auerbach formed garage rock supergroup The Arcs and returned to solo music for the first time in a decade, as well as doubling down on work as a producer, a skill Carney has also notably honed with numerous great artists (including his now-wife Michelle Branch) in recent years. It was always clear that the Keys would be back sooner or later, though, and their triumphant return with new ninth album ‘Let’s Rock’ feels expectedly energized and refreshed, doubling down on the era-spanning, gimmick-free, arena-primed, and unadulterated electric garage and blues rock the band excel at. While we imagine this comeback will have some longevity and it won’t be as long before they make their way to Music City once more, the duo’s return to their adopted home is sure to be a celebratory affair, and a show you won’t want to miss!

After a frustratingly long eight years, Pacific Northwest indie rock icons Modest Mouse dropped their sixth album, Strangers to Ourselves, back in 2015, and have remained incredibly active on the road ever since. Though we’re keeping our fingers crossed for a (relatively) quicker followup, and a couple of recent singles seem to indicate that another release is imminent, it’s been a real treat to see the band, who never officially broke up, but significantly slowed down their activity for a number of years, regularly making their way to Nashville once more, with four Music City stops (and even more nearby festival appearances) in the last three years, ending almost a decade absence. Formed in 1992 in Washington, and now based in Portland, the group, helmed by frontman Isaac Brock, found mostly underground recognition throughout their early years, beloved for a quirky, off-kilter, and genre-bending indie and alternative sound. Though their third LP and major label debut The Moon & Antarctica, which arrived in 2000, drew near universal acclaim, and catapulted them to fame in the indie scene, landing them on the road with a number of exciting acts and breaking through to commercial success, it was 2004 followup Good News for People Who Like Bad News, propelled by ubiquitous breakout single “Float On,” which truly made Modest Mouse a massively famous, breakout, household name, arriving at a time when indie and garage rock were having a huge cultural moment, rising up in prominence behind the pop punk of the early ’00s, as perhaps the last major commercial moment for rock music, before it began to fade from the mainstream at the end of last decade. Recruiting Smiths guitarist Johnny Marr as a brief member of their ever-revolving lineup ahead of 2007’s We Were Dead Before the Ship Even Sank, Modest Mouse continued to ride a wave of critical and commercial success for a few years, before slowing down around the turn of the decade, beginning a cycle of many years of teasing work on a new album and making the occasional festival stop, before kicking back into gear around Strangers to Ourselves, and remaining incredibly active since. A cool, quirky, indie counterbalance to The Black Keys’ more straightforward and blues-based sound, Modest Mouse alone would be enough to make this show a must-see, and help make this bill perhaps the fall’s most essential arena show.

Husband an wife duo *repeat repeat are longtime friends of the site and a longtime local fixture, helping forge and facilitate a space for exciting local acts on the rise with their beloved East Nashville Underground concert series, which also served as a backdrop for some of their earliest shows. Founded by frontman Jared Corder, the band’s nostalgic, harmonic, garage rock sound nods to ’60s California surf music and, more recently, has evolved into a frenetic indie pop, filled out by the harmonies of his wife Kristyn, who lent her vocals to early sessions at a producer’s encouragement, and soon became a permanent fixture, also handling keyboards and shaping the band’s vibrant and stunning visual aesthetic. Anchored by the Corders, *repeat repeat went from local buzz to national with their debut record, Bad Latitude, in 2014, and after constant touring and mounting attention, inked a deal with Dangerbird ahead of 2017’s more adventurous, confident, wistful, and pop primed followup, Floral Canyon. For their most recent and third LP, Glazed, which arrived earlier this year, the duo, who’ve spent the past few years playing increasingly more high-profile shows, appearing at events like Bonnaroo and Live on the Green, and continuing to organically grow their passionate fanbase, tapped The Black Keys’ own Patrick Carney as producer, to help craft their most nuanced, earnest, visceral effort yet, doubling down on both their more dark, confessional, and earnest thematic tendencies while balancing their sugary, glistening pop sweetness. A joyous and engaging live band, *repeat repeat seem well on the way to becoming Nashville’s next big rock success story, and their debut appearance at Bridgestone Arena is no small stepping stone on at journey. They’re on at 7 p.m. sharp, so Nashville: DON’T BE LATE!