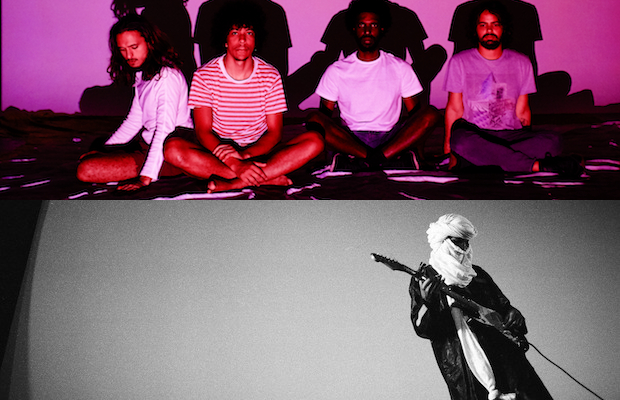 Formed by childhood friends, frontman Fernando “Dino” Almeida and guitarist Benke Ferraz, as teenagers in their hometown of Goiânia, Brazil, Boogarins began as a DIY home recording project, fusing a love for ’60s Tropicalia pop, psychedelic rock, and contemporary indie, and opting to sing in their native Portuguese. After early recordings attracted unexpected buzz from tastemakers around the globe, the band settled on a name, filled out their rhythm section with bassist Raphael Vaz, and, later on, drummer Ynaiã Benthroldo, and signed with Other Music ahead of the release of their debut album, As Plantas Que Curam, in 2013. Resonating worldwide, the band soon found themselves touring across continents, heralded for their worldly and era-spanning take on psych rock. 2015 sophomore LP Manual ou Guia Livre de Dissolução dos Sonhos would earn the group a Latin Grammy nomination, and surprise 2017 release Lá Vem a Morte and this year’s latest, Sombrou Dúvida, have continued to expand their sonic reach. Whether fluent in Portuguese or not, the group’s ability to express intent and emotion feels universally resonant, and their unique and honed psych rock, at once indebted to classic artists while feeling thoroughly contemporary, will immediately hook you in. Their outing with Andrew Bird at The Ryman a couple years ago was one for the books, and a smaller club setting feels perfectly suited for this unique band. Don’t miss out!

Like Boogarins, Mdou Moctar is a world artist making a profound impact on a global stage. Hailing from a small village in central Niger, the Tuareg artist first taught himself to play on a homemade guitar, cobbled together with wood and bicycle break wires, as a secular music was all but prohibited. After a few years (and after procuring a real guitar, which he learned to play in secret), Moctar had attracted a rabid underground following, boosted by a cellphone and memory card bootleg trading network throughout the Saharan region. Bringing a psychedelic, culture-spanning, pop and rock sensibility and electric update to traditional Tuareg guitar music, as well as penning original and poetic compositions in a regional scene awash with cover bands, Mdou’s early works and compilation appearances soon managed to land in the hands of music fans outside of West Africa, eventually linking him up with Christopher Kirkley of Portland’s Sahel Sounds, who proceeded to help Moctar, who around the time also starred in the first Tuareg language film, a remake of Prince’s Purple Rain, to reach a broader worldwide audience. Leading a sort of dual musical existence, at home a regional hero and regular wedding performer, and abroad a unique, genre-bending, complex cultural export, Moctar traveled to Detroit to work with engineer Chris Koltay as well as several fellow West African musicians to craft his first full band, most formal album to date, this year’s Ilana (The Creator), finding an unparalleled and unique fusion of traditional Tuareg  music and western influence. Beloved by global audiences and press, Mdou Moctar is certainly one of a kind, and a perfect, worldly compliment to Boogarins.