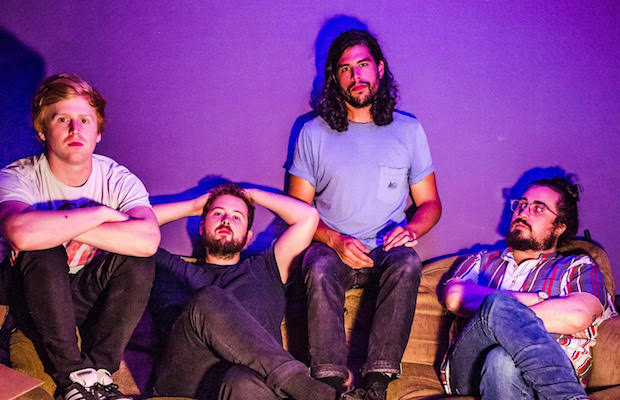 If you regularly read the site, you’ve likely already seen us on numerous occasions rave about up and coming local indie act American Roommates, whose layered, hypnotic, impassioned, earnest, and dynamic style channels artsy and genre-bending indie bands like Arcade Fire and Modest Mouse. A regular fixture of the local DIY show circuit, the group earned even more buzz last year thanks to their fantastic EP Am I An Adult Yet?, which they are set to follow up with a highly-anticipated debut full-length, Moves, on Sept. 6. So far, two singles, “Wasting Life” and “Heaven Can Wait” have arrived, giving us an excellent glimpse at what’s in store for the long-awaited LP, and, today, before it officially drops on streaming services tomorrow, we’re beyond thrilled to bring you an exclusive premiere of the band’s official music video for their latest single, “My Moves.”

Originally from Columbus, GA, American Roommates relocated to Nashville a few years back, and have since fully integrated into the local DIY scene, performing at clubs and alternative spaces all over town at an increasingly frequent clip. The band’s 2015 early EP Tomahawk served as an admirable introduction, but as they’ve steadily become an exciting and essential fixture in the local indie scene, further cementing their sound while solidifying their permeant lineup, they really came into their own and made a more formal debut with last year’s Am I Am Adult Yet? and this year’s Split EP with Lacquer, positioning them as one of the best and most essential rising indie acts in town.

Real-life roommates, residing in a house and de-facto studio space they’ve dubbed The Ranch, American Roommates spent the better part of two years crafting their LP. While the drums, bass, and vocals for the album were recorded at a private retired heart surgeon’s house studio in Bell Meade, the majority of the guitars and synths were recorded at The Ranch, which is also where they shot the video for “My Moves,” filmed and edited by Lauren Weber and featuring friend of the band Josh Landrith. As with much of American Roommates’ aesthetic, the spot provides a bit of a lighthearted, fun-loving juxtaposition for a song that sounds fairly personal and earnest, and only manages to ramp up our excitement for the LP, sure to be one of the absolute best local releases of the year.

You can watch “My Moves” below, find the single streaming tomorrow (ahead of the LP next week), and celebrate American Roommates’ new album with a release show this Saturday, Aug. 31 at The High Watt, also featuring Vid Nelson, Shoe, and Ceci (details and tickets here)!