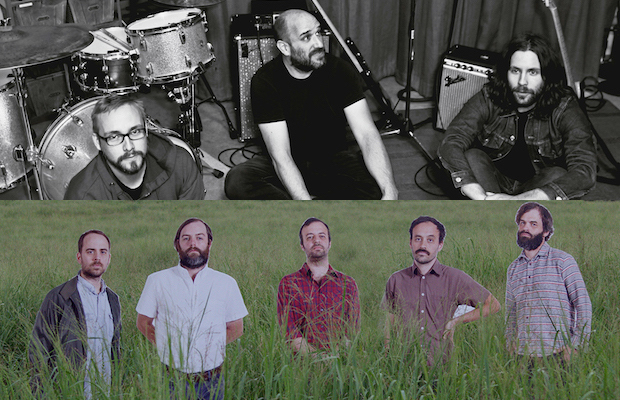 Beloved late ’90s and early ’00s indie fixture and emo pioneers Pedro the Lion first mounted an official reunion a couple years ago, but it was only this year that the David Bazan-led outfit finally released their first full-length in 15 years, Phoenix. Their legacy, of course, is reason enough to make them a must-see for any fan of contemplative, emotionally-charged indie music, but with new tunes in tow, Pedro’s return to Nashville tonight, Aug. 23 to headline The Basement East (moved from Cannery Ballroom), feels extra essential! Sweetening the deal are co-headliners mewithoutYou, who, despite frequent stops in Music City, are never anything short spectacular, praised for their artsy, genre-bending, post-hardcore infused indie rock sound, which feels more refined than ever on last year’s latest, [Untitled]. Tickets are available here while they last, and you can read on for more about both acts!

For all intents and purposes, David Bazan is Pedro the Lion and Pedro the Lion is David Bazan, and yet the moniker hadn’t been used for any new releases since 2004, and hadn’t been used live, save for a 10th anniversary tour for beloved LP Control in 2012, since the group formally disbanded in early ’06. That all changed in 2017 when Bazan, who’s kept busy with a prolific solo career and a variety of side projects, announced the return of Pedro and his desire to be in a band full-time once more, resulting in the group’s inaugural tour back, as well as the promise of new music and a brand new record deal with Polyvinyl. If Pedro is largely an extension of its creator and frontman, then what’s all the fuss about? It’s difficult to articulate, but the project, which formed in ’95 and released its first full-length in ’98, seemed to define a style, thematic approach, and headspace for Bazan, who, while the only constant, did bring in a revolving door of bandmates and backing players, who increasingly became more involved in the creative process by the ’00s (however, no lineup really came to specifically define Pedro, and the fact that the reunion seems to involve a mix of former and new bandmates doesn’t really undercut it- it’s all about Bazan reconnecting with the moniker as well as his musical past it represents). Emo adjacent, Pedro helped perfect a slow, earnest, layered, and melodic fusion of indie and alternative rock, wrapped up in conceptual lyrics about religion and politics, among other topics, going on to influence a genre-spanning variety of acts in the mid-’00s. Releases like Achilles Heel and the aforementioned Control have come to be regarded as masterpieces of the scene, and though Bazan’s subsequent efforts under his own name didn’t deviate far from the template, despite being a bit more minimalist, and his other projects- Headphones, Lo Tom, The Undertow Orchestra, and Overseas- were all excellent in their own right, there was something so magical and transcendent about PTL, which, judging by David’s comments, is something he truly felt reconnected with enough to warrant bringing the band back. Far from a nostalgia grab (nostalgic though it may be), but rather the full-on return of one of indie rock’s finest bands, Pedro’s long-awaited fifth LP, Phoenix, arrived earlier this year, and feels like the best evolution and modern take on the group’s legacy we could have hoped for.

Hailing from Philadelphia and formed at the turn of the millennium, art-rock/post-hardcore outfit mewithoutYou seem to make their way to Nashville at least twice a year or so; something that would normally seem excessive, but for a band this good, we devour their every show. Juxtaposing smart, philosophical and high-concept themes with musical elements of indie rock, alternative, post-hardcore, and art rock, mewithoutYou have amassed a loyal following over the years, enhanced by their personal, electrifying live show, genre-bending sensibilities, and blend of conceptual and deeply personal lyricism, which makes them one of the best, most versatile acts of the indie scene. A few shows back, in 2014, the group celebrated the 10th anniversary of their fan favorite sophomore album Catch For Us the Foxes, then a few years later returned for another anniversary, stepping even further back to honor the heavier, rawer LP that started it all, 2002’s [A→B] Life. After some nostalgic runs, as well as a few high-profile supporting slots (even a tour with Dr. Dog that brought them to the historic Ryman stage), mewithoutYou finally turned their attention back to something new, returning last year with a seventh LP, which is officially untitled and listed as [Untitled]. It’s a dense, smart, raw, tumultuous, and powerful personal effort, a reflection both of the times and the state of the band in present day, and is perhaps mwY’s strongest record in years, making their latest stop off in Music City, especially for this inspired co-headlining pairing of two distinctly different but equally beloved genre-bending indie fixtures, one to be extra excited about. Don’t miss out!