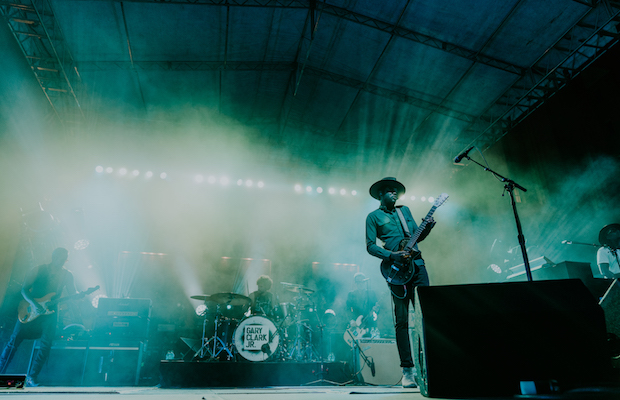 Kicking off its eleventh season, the annual Live on the Green free festival series returned Thursday to Public Square Park, setting the bar high for yet another exciting year. With a headlining set from breakout blues-infused Texas rocker Gary Clark Jr., along with Canadian folk pop outfit The Strumbellas, buzzy British soul and folk singer Yola, and Nashville based, British born rootsy pop singer Lucie Silvas, week one, continuing the four act format adopted last year, featured largely touring acts, but ones very familiar and dialed into the Music City scene, and if the packed and diverse crowds were any indication, they were a wonderful fit for an inaugural show. In a slight tweak from reason years, Live on the Green is slated to now run three Thursdays instead of four, ending with an epic four-day affair (up from three), extending across two stages through the final Thursday, Friday, Saturday, and Sunday. We have performers like Grace Potter, St. Paul & The Broken Bones, Lake Street Dive, Robert Randolph, Steve Earle, O.A.R., and Johnnyswim to look forward to, but, before we preview the exciting weeks ahead, take a look at our recap and photos from week one below!

I’ve been attending Live on the Green now for eight seasons, over two-thirds of its run, and covering for seven for No Country. It’s been a thrill to watch it grow, and to see so many great bands pass through, often to return again a few years later to bigger crowds and wider success (this season is no exception). However, despite his meteoric rise over the past few years, and frequent stops in Nashville, Gary Clark Jr. was a first-timer at the fest, and a stellar get to kick the year off strong, so heading into week one, my anticipation was especially high for yet another great, free night of fun in Public Square Park. At this point, LOTG runs like a well-oiled machine, and after arriving to a modest but eager early crowd, scoping out this year’s crop of venders and food trucks, and situating in my spot by the stage, I felt a rush of excitement thinking about the evening as well as the weeks ahead. 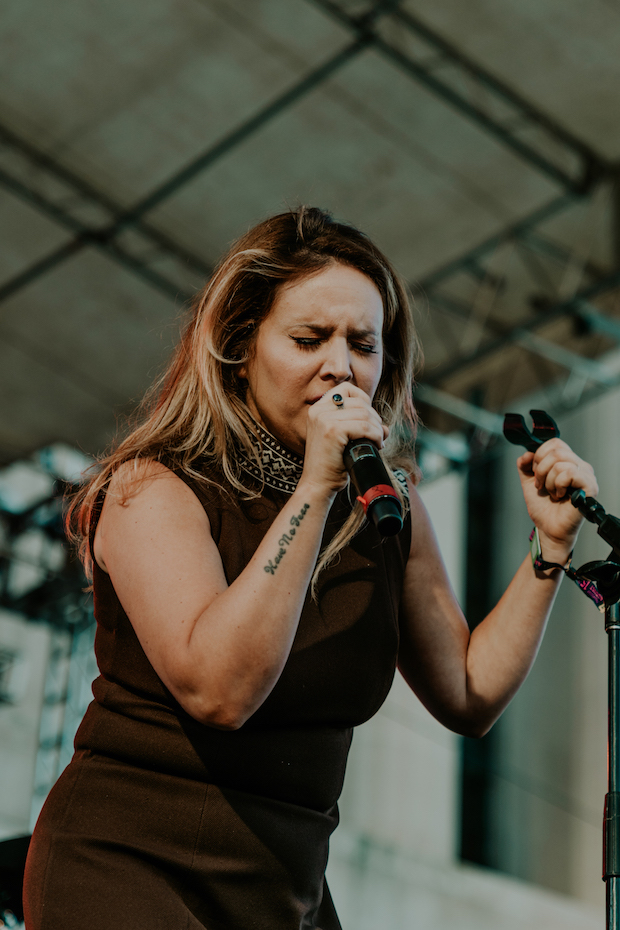 By the time local singer-songwriter Lucie Silvas took the stage, after a warm introduction from the Lightning 100 crew, the crowd was already filling in, no doubt especially encouraged by the clear skies and decently pleasant weather (after this brutally warm summer, I’m keeping our fingers crossed for the same luck in subsequent weeks). I’ve long been aware of Silvas, and even written about her local performances on a handful of occasions, but somehow this marked my first time getting to see her in concert. A excellently selected opener, in part because she was the only truly Nashville based artist of the evening, Silvas was captivating and charismatic from note one, proving her versatility by alternating from keyboard to solo vocals, all backed by an excellent band of players, including her husband, John Osborne, of famed country group Brothers Osborne, handling guitar duty. Boasting pop hooks, powerful vocals, and rootsy arrangements without every staying into full-on country territory, Lucie showcased work from her eclectic catalogue, and felt like an excellent exemplar for Music City’s wide breadth of talent, kicking the night (and the season) off on a fittingly high note! 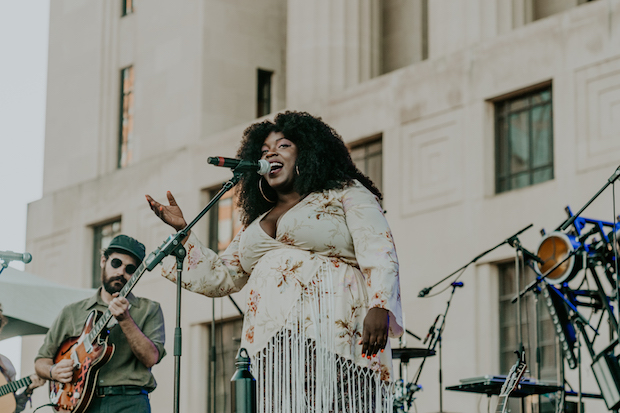 Things started on a bit of a delay, a rarity for LOTG (though by Gary Clark Jr.’s performance, it was more or less back on schedule), so by the time soul singer Yola took the stage, the sun was beginning to set and the after-work crowd was filling out the field. I remember her prior group, Phantom Limb (though I don’t believe I ever saw them in person), but it’s Yola’s recent full-length debut, Walk Through Fire, that really captured my attention, thanks to her unbelievable voice, and rootsy, soulful, genre-bending sound. Notably, Dan Auerbach produced the album (and released it through his Easy Eye Sound), and a backing band of Nashville players performed on it, so I wondered if we might see him sit in for a song. Though that didn’t come to pass, he did sit side stage throughout, grinning and grooving like a proud friend and fan. Channelling a true timelessness and commanding yet calming stage presence, the British singer absolutely blew me away from the moment she began her set, likely winning over many a new fan in the process, with a style that certainly complimented the evening’s headliner, Yola even rocking a guitar herself for portions of the set (though more for folk and Americana type numbers than Gary’s shred-tastic blues rock). Though, for the most part, I wasn’t deeply familiar with her tunes aside from tracks I’ve heard around like “Ride Out in the Country” and her LP’s title tracks, as well as a listen or two I’ve given it lately, Yola left me instantly wanting to make her a regular fixture in my musical rotation, and definitely seems like a performer we’ll see back with even bigger billing at a future LOTG. 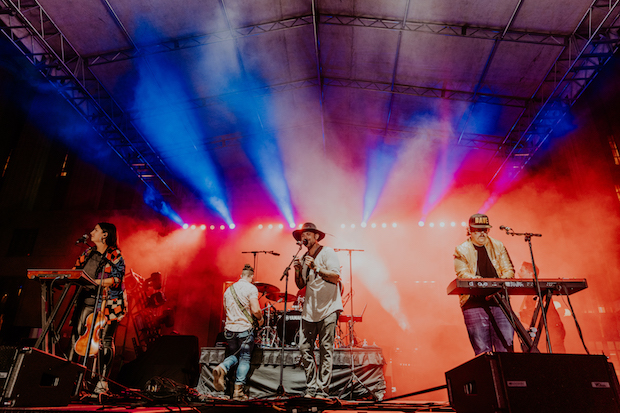 The Strumbellas. Photo by Andrew Ha.

The Strumbellas are a band I’ve certainly been aware of for awhile, and have caught here and there at festivals, but aside from breakout single and certifiable ear worm “Spirits” and an odd playlist or radio tune here and there, I, admittedly, hadn’t really listened to them much, already a bit burnt out on pop folk by the time they rose to fame. I remember thinking they were pretty good when I’d seem them live before, but never anything that particularly stuck with me, so I looked forward to seeing them here with moderate but favorable expectations. Maybe due in part to my underselling them, but wow, their Live on the Green performance really blew me away, and certainly proved to be the biggest surprise of the evening. Energetic, upbeat, personable, and engaging, the band, who filled out the stage with their electric array of instruments, and dazzled with eye-popping lights and fog, really seem to have evolved in more recent years, both sonically (they’ve really leaned in to the indie rock side of the sound, with guitars and keyboards pushing their edgy, poppy tunes forward) and in electrifying stage presence. New tunes like “Salvation” and “I’ll Wait” had me instantly regretting not giving the group more attention, and familiar cuts like “We Don’t Know” and “In this Life” sounded better than ever, singer Simon Ward really proving an apt and exciting frontman. Lesson learned yet again, but I always love checking in with groups at different points in their career, especially when my notions of them are challenged and exceeded. For sheer fun, energy, and infectious enthusiasm, The Strumbellas’ performance is going to be a high bar to meet this LOTG season. 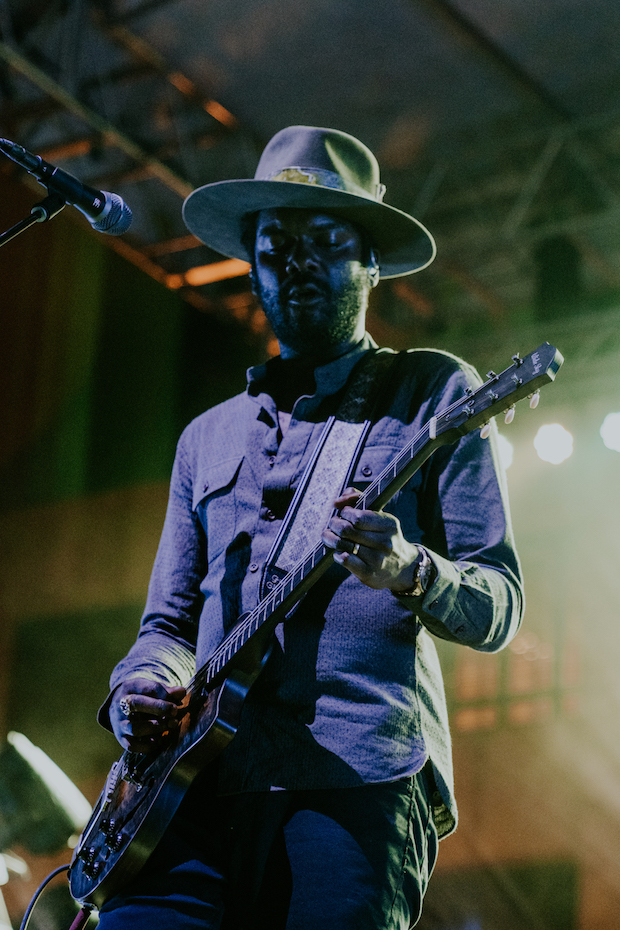 Coming off of the high of Strumbellas (their crowd work was truly wonderful and left the audience revved up), and after a quick changeover that got the show more or less back on schedule, Gary Clark Jr. was proceeded by a quick check-in from Mayor Briley. Clearly hoping to win some support, the mayor made what seemed to be a marijuana joke, and insinuated that it was important to vote to keep events like LOTG going (to be fair, I have no reason to believe his opponent, John Cooper, is pushing policy that would threaten LOTG, but leaning on his support of the event and local music community is smart politics in a tight race, so points for showing up I guess).

After a few more minutes of buzzing anticipation, Clark appeared onstage, bouncing from his signature “Intro” to breakout single “Bright Lights.” I’ve seen the rocker numerous times before, but always in festival settings or opening at large shows, so getting a spot so up close and personal to see him play a full-length, headlining set was much more intimate and engaging than any prior performance. Effortless in his technical expertise, Gary sits in a class of his own alongside heralded modern retro rockers like Jack White and John Mayer, infused with the tradition of r&b, soul, and blues, but always with an overarching rock and roll bite. For every moment of show-stealing technical prowess, prowling around and emoting through six strings alone like few artists are able to, there was just as much intimate, vocal-driven, earnest delivery, with a lengthy set spanning nearly every era of his celebrated career, but especially and predominately from Gary’s most recent, most personal, timely and essential effort This Land. An artist who both bridges many era of musical tradition and also feels immediately urgent and ingrained in the zeitgeist and social atmosphere of the present, there’s a reason Gary Clark Jr. has shared the stage with everyone from Tom Petty to Foo Fighters to The Rolling Stones to Lauryn Hill, harboring an enigmatic, genre-bending, mass appeal and genuine star-power that is truly unrivaled. He also couldn’t be better suited for an event like Live on the Green as he is, notably, one of the most in-demand festival performers on the planet. Working through inspired renditions of tunes like “When My Train Pulls In,” “Our Love,” “I Walk Alone,” and “What About Us,” Gary gave one of the most impassioned and captivating LOTG performances I’ve ever seen, keeping the audience elated and enthralled until the very end, closing, of course, with his popular reworking on The Beatles’ classic “Come Together.” I can’t think of a cooler way to end week one of this local musical institution, and with an exciting lineup in store for the coming weeks, this felt like a tough-to-top appetizer.

Live on the Green continues this Thursday, Aug. 22 with an impressive lineup of Johnnyswim, Mat Kearney, Amanda Shires and Will Hoge. Keep an eye out for a full preview later this week, along with our coverage after the show. And, as always, head to LOTG’s site for more info.