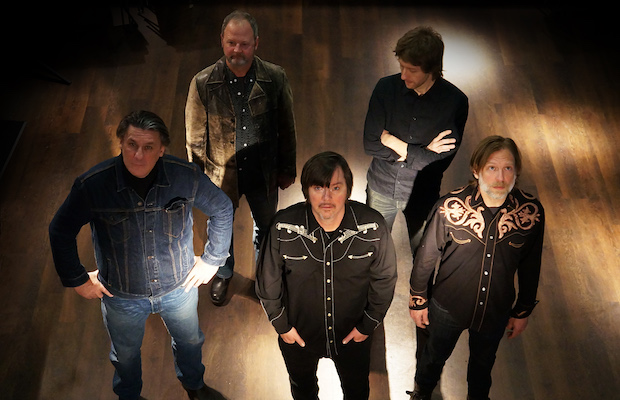 Jay Farrar’s long-running, beloved, influential first project post-Uncle Tupleo, alt country outfit Son Volt are celebrating their 25th anniversary this year, as well as the release of their recent, politically charged ninth album Union. A longtime cult favorite and an immeasurable influence on the contemporary alt country landscape, the band have remained prolific since returning from hiatus in the mid-’00s, and seem to make it to Music City every few years for a headlining outing. Their latest will take place June 27 at The Basement East, with breakout newgrass string band Old Salt Union tapped to support! You can still get tickets right here, but we’re exited to announce that we’re also giving away a pair of tickets to one lucky fan! Read on for more about the show, and enter for a chance to win below.

After achieving cult fame and becoming a seminal influence on the burgeoning alt country scene in the late ’80s and early ’90s, helping paving the way for contemporary Americana, with Uncle Tupleo, alongside future Wilco frontman Jeff Tweedy, prolific singer-songwriter Jay Farrar regrouped and reemerged after the band’s breakup in 1994 with St. Louis based outfit Son Volt. Doubling down on some of Uncle Tupelo’s more conventional alt country influences, the group inked a major label deal and found critical success with their 1995 debut LP, Trace, which has since become a cult favorite. After several years of constant touring, and two more records, 1997’s fan-favorite Straightways, and the following year’s more alt rock inspired Wide Swing Tremolo, Farrar announced the group’s intention to go on hiatus in 1999, subsequently forging a career as a respected solo artist, which has continued in the decades since, including teamups with the big name likes of Ben Gibbard and Jim James. Always maintaining an intention to bring back Son Volt, even after their label issued a retrospective album sparking true breakup rumors, Jay returned to the moniker in ’05, assembling a new lineup and returning to their early sound with fourth album Okemah and the Melody of Riot. In the near decade and a half since, the band have remained fairly prolific, balancing Farrar and other members’ various side and solo endeavors to tour and record every few years, as well as re-release and pay tribute to anniversary milestones for their earlier work. After 2007’s The Search and ’09’s American Central Dust, Son Volt really leaned into their country influences with 2013’s Honky Tonk, before veering into blues rock with 2017 effort Notes of Blue. On their latest and ninth album, the recently released Union, the band, now celebrating 25 years since their inception, have managed to conjure a sound that feels representative of their every era, from alt country troubadours to alt rockers to Americana trailblazers, propelled by a an impassioned and focused mediation on the country’s current political and economic turmoil, interspersed with reflections on love and the power of musical healing. Always more influential and critically beloved than commercial famous, Son Volt are, nonetheless, one of the best and most important American bands of the last couple decades, and any chance to see them live is one you should take!

Hailing from Farrar’s hometown and Uncle Tupleo’s birthplace of Belleville, IL (bassist and primary vocalist Jesse Farrar is, notably, Jay Farrar’s nephew), string band Old Salt Union are part of the “newgrass” subset of the bluegrass and Americana scene, also incorporating elements of rock, jazz, classical, alternative, and jam into their eclectic sound. Formed in 2012, the group have quickly become a prolific and beloved new fixture of the bluegrass scene, as well as a festival staple, regularly appearing at events in the midwest and south, as well as the rest of the country, like Stagecoach, LouFest, Harvest Festival, and Bluegrass Underground, and have shared the stage with acts like Yonder Mountain String Band, Del McCoury, Greensky Bluegrass, and Sam Bush. Now signed to Nashville’s Compass Records, the band released their eponymous fourth LP in 2007, and are a perfectly complimentary choice to get this show started!

Winner will be announced Wednesday, June 26 at 12 p.m. CDT, and will receive one pair of tickets. Good luck!