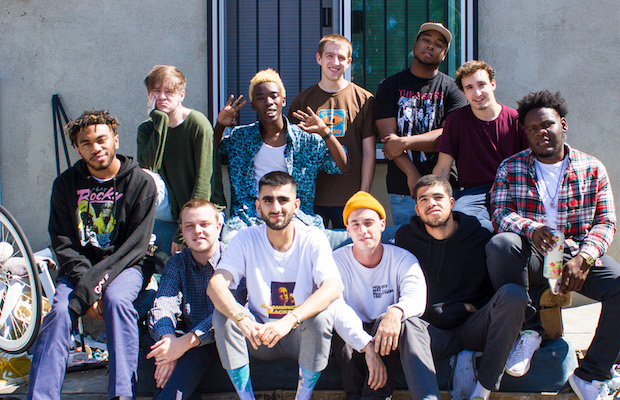 One of the most profound and exciting musical acts to find prominence in recent memory, LA’s BROCKHAMPTON seemed to appear out of nowhere a couple years ago to become an overnight sensation. And though, while their ascent has definitely been swift and prolific, the groundwork was laid out for a number of years prior, tracing back to core members of the self-described “boy band”‘s teenage years. While BROCKHAMPTON’s official 13-person roster accounts for a range of racial and ethnic backgrounds, sexual orientations, and geographic origins, several of the band’s founders grew up together in San Marcos, Texas, forming the genesis of BROCKHAMPTON in high school, both in person and by networking with other artists on the message board KanyeToThe. An early version of the group camera together in 2012 under the moniker AliveSinceForever, with band members moving in together in Texas to hone their initial eclectic, alternative hip hop sound. Not long after de-facto leader Kevin Abstract released his first solo LP, MTV1987, in 2014 (going own to achieve some well-deserved recognition on his own, even appearing at Bonnaroo in 2017), the group rebranded as BROCKHAMPTON, and after a string of buzzy singles the following year, released their debut mixtape All-American Trash in 2016.

Cementing their ranks, only about half of whom are vocalists, and the rest tasked with roles like production, engineering, DJing, photography, graphic design, web design, creative direction, and management, all of which are important enough to BROCKHAMPTON’s overall aesthetic to be deemed full-time members, the group relocated to South Central Los Angeles, living together to work and create 24/7 in a fiercely self-sufficient and independent manor, which soon attracted the attention of both the blogosphere and television network Viceland, who debuted a reality show centered around the group, American Boyband, in 2017. That year was BROCKHAMPTON’s most transformative, as, in addition to the show, they released a stunning three introductory full-length albums, all part of a trilogy called Saturation, which catapulted them to worldwide fame, celebrated for their diverse, ambitious, refined, artistic, and thoroughly modern take on hip hop. After two announced and abandoned subsequent LP, BROCKHAMPTON hit a speed bump last year when longtime member Ameer Vann was accused of sexual misconduct (accounting for their last minute Bonnaroo ’18 cancelation), but took appropriate actions to boot him from their ranks, then proceeded to craft a stunning fourth LP, Iridescence, partially recorded at the famed Abbey Road, and released through new major label home of RCA last fall (their record deal is rumored to be a whopping eight-figure, six album contract). A transcendent live force who’ve already made headlines for show-stealing appearances at numerous other big festivals, BROCKHAMPTON are, without a doubt, poised to be one of if not the best thing you’ll see all weekend at Bonnaroo.