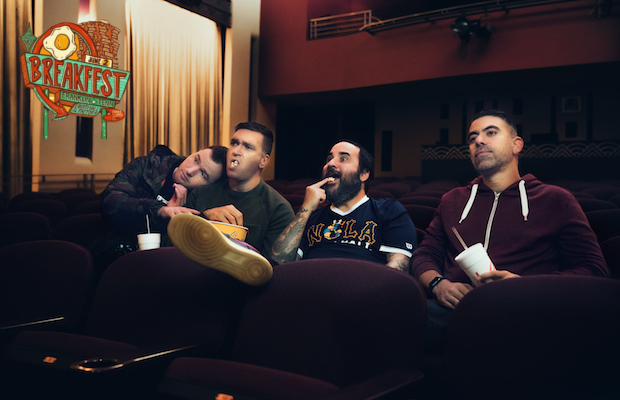 As we’ve previously noted (and discussed in an interview ahead of last year’s inaugural festival), New Found Glory guitarist and BreakFEST founder Chad Gilbert has called the Nashville area home for several years, and singer Jordan Pundik previously resided in Music City as well, so it should come as no surprise that the iconic pop punk group, who formed 22 years ago in Florida, have become increasingly bound to Nashville, opting to rehearse and record here in recent years, and even finding time to play three sold out local shows over the course of their 20th anniversary tour, all ahead of headlining last year’s first BreakFEST. Fusing their love of hardcore with a penchant for unabashedly poppy punk hooks, the band grew to prominence within the scene around the turn of the millennium, finding breakout critical and commercial acclaim with 2002 third album Sticks and Stones, which arrived at time that pop punk was fast becoming the dominant force in rock, a movement which NFG, no doubt, helped usher in, as important to the era as peers like Jimmy Eat World, Fall Out Boy, and Taking Back Sunday, and as visible at the time as mega acts like Green Day and Blink-182, while still maintaining ties and appeal to the DIY and more underground side of the scene, as well as keeping a connection to their love of hardcore (notably, the band even spent a few years in the late ’00s making hardcore as International Superheroes of Hardcore).

2004’s Catalyst was a similarly huge, crossover effort, and helped cement what’s more or less been the template for  many great albums to follow. As pop punk shrunk from the mainstream, some of the group’s less tenable peers faded away, but New Found Glory doubled down on crafting fan-focused, true to their roots music, maintaining a cult following with a steady stream of solid records, consistent touring, and sincere approachability. Their latest original effort, ninth LP Makes Me Sick, arrived in 2017, sounding as vibrant and as relevant as ever, especially with the uptick of interest pop punk has experienced once more over the past few years. But this time around, NFG are celebrating another very special and long-awaited release: a completion of their two-decade spanning film soundtrack cover trilogy, From the Screen to Your Stereo 3, where they’ve put their own unique pop punk spin on tunes like “Eye of the Tiger,” “The Power of Love,” “This Is Me,” and more (and have been giving each track an appropriately fun and funny music video treatment as well). A hugely influential and legendary band, we’re thrilled that New Found Glory turned Nashville in a de facto base of operations, and beyond fortunate that they chose our area to launch BreakFEST, which we hope to see them play for years to come!

LISTEN | “My Friends Over You”

WATCH | “This Is Me” (Official Music Video)