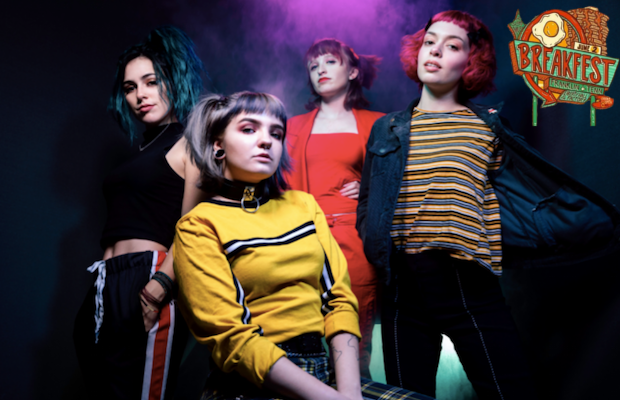 Hailing from Phoenix, Arizona, none of the four young women who make up fast rising, hard rocking punk outfit Doll Skin are older than 22, but have, impressively, already released a couple of albums with another on the way, supported acts like Social Distortion and The Dead Kennedys, appeared on the Vans Warped Tour, and have earned national press and particularly long-running regional acclaim. Formed after meeting at the School Of Rock Scottsdale, Doll Skin came together in 2013 as teens, winning a local Rock Revolution battle of the bands competition, which caught the attention of Megadeth bassist and judge David Ellefson, who later approached the group to help guide their career and produce their early work.

Doll Skin’s 2015 debut EP, In Your Face, helped earn broader buzz, and an expanded version, In Your Face (Again), served as something of a de-facto debut LP the following year, catching the attention of national press outlets and earning the group a reputation as an artist to watch. By proper original full-length debut Manic Pixie Dream Girl in 2017, Doll Skin were regularly touring, heralded for their polished fusion of punk, pop punk, and metal, making them a versatile act, and a band with more bite than their brightly colored hair would suggest. Their upcoming new record, Love Is Dead and We Killed Her, due out June 28 though new label home Hopeless Records, was inspired by traumatic and extraordinary personal events, and already seems like the band’s most mature, raw, and dark album to date, but don’t worry, their electrifying live show, forged from years on the road, should bring plenty of levity and excitement. Show up early and see what they’re all about!