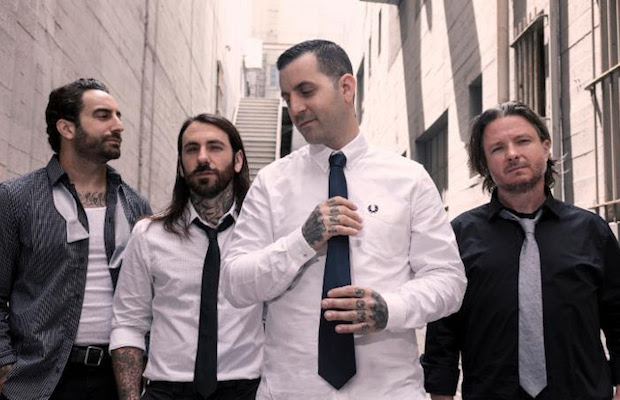 Embarking on a special, stripped-down, full band acoustic tour in support of last fall’s Acoustic Volume 2 (a followup to their original Acoustic EP from way back in ’06), New York alt/punk outfit Bayside are set to return to town tonight, Feb. 2 for a very special, all ages outing at Topgolf’s The Cowan, along with Kayleigh Goldsworthy! Certainly a unique and essential show for anyone who’s been following the band for years (and a cool compliment to their more conventional, full band show last summer at BreakFEST in Franklin), you can still grab tickets right here!

Named for the Bayside neighborhood of their native Queens, New York, Bayside, who are also now partially Nashville based, formed in 2000 and, due to swift underground buzz, inked a deal with Victory Records ahead of their breakthough debut effort, 2004’s Sirens and Condolences. The band’s eponymous followup a year later would further help cement them as a scene staple, since finding a legacy as a classic effort of ’00s pop punk, and set them on a course to embark on increasingly high-profile tours, including numerous stints on Warped Tour, landing a dependable cult following. While their early sound was rooted in punk rock and emo, Bayside have proven adventurous and versatile, gravitating towards a more alternative and even indie rock sound over the years, particularly with 2016’s excellent, most recent full band album Vacancy. Though members of Bayside regularly pop up in solo or collaborative efforts around Nashville, they don’t make it to Music City a ton as a unit, and even more rarely in a stripped-down fashion like this, so consider it a must if you’re a long-time fan!

A former Nashville resident and alumni of our Acme showcase series, accomplished singer-songwriter Kayleigh Goldsworthy released her long-awaited new EP, All These Miles, last fall, recorded in Music City with producer Arun Bali. Formerly of indie rock group The Scarlet Ending, Goldsworthy began incorporating folk, country, and pop influences into her sound on 2013’s Burrower, upon shifting gears to pursue a solo career a few years back. All These Miles, in turn, ventures back to a more electric, pop and rock geared bent, though still informed by her stylistic exploration along the way. A seasoned a versatile artist and an electrifying live performer, Goldsworthy has been a favorite of ours since long before she called Nashville home, and remains such in her new home base of Philly. Be sure to show up early!

Bayside and Kayleigh Goldsworthy will perform tonight, Feb. 2 at The Cowan. The show is all ages, doors open at 8 p.m., and tickets are available for $25.