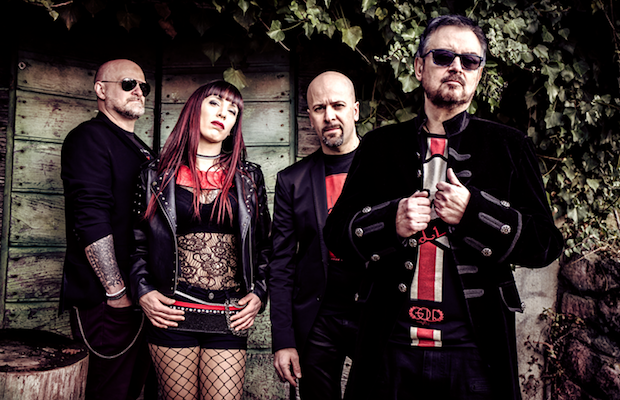 Formed in Italy in the early ’70s out of the ashes of various prog rock groups, Goblin began their life as the Cherry Five, failing to make an early splash, but fortuitously catching the ear of Italian horror filmmaker Dario Argento, who tapped them to score his 1975 cult classic Deep Red. With a new name and a new niche, Goblin went on to lend their brooding, progressive, synth-heavy, iconic tones to a variety of other famed horror films, including George Romero’s Dawn of the Dead, also finding time to craft beloved original work, including 1976 LP Roller. Decades removed and more influential and lauded than ever, the band’s most enduring work is, perhaps, their score to Argento’s 1977 cult hit Suspria, with both the film and music going on to influence countless other musical acts, composers, and filmmakers in the 41 years since.

On the heels of  Luca Guadagnino’s stellar, recent high-art remake (complete with a new, distinct, albeit comparatively understated, score from Thom Yorke), Goblin are out on the road to prove why the original is still so timeless and unparalleled, embarking on unique run that both cult horror fans and lovers of Italian prog rock won’t want to miss, as they play their Suspiria score live in its entirety each night to a screening of the film (so it’s equal parts concert and seated film screening). This unique run makes its way to Music City tonight, Dec. 2 at Marathon Music Works, and while we’ll be the first to admit that this is not a show for everyone (if you’re not familiar with the film, it’s unlikely to drum up the same level of excitement, though classic horror fans that’ve slept on it still might want to consider this), for a niche few, it’s guaranteed to be a surreal and special evening.

One note: over the years, Goblin have disbanded and reformed, changed names, gone through a revolving door of members, and, as many long-running acts with various strong personalities are wont to do, have fractured into various competing factions simultaneously active. A version of Goblin, simply called Goblin and helmed by founding guitarist Massimo Morante, made their way to Exit/In last year on a national tour. The version of the band performing tonight is not that band, but instead one led by founding keyboard player (and perhaps best-known member) Claudio Simonetti, sometimes called Claudio Simonetti’s Goblin or Daemonia. Unless you’re a super fan, this shouldn’t really matter, but having Simonetti on the keys for this particular event sounds great to us. Grab tickets here, and get ready for the coolest Suspiria screening you’ve ever seen!

Goblin will perform their score live to a screening of Suspiria tonight, Dec. 2 at Marathon Music Works. The show is all ages, begins at 8 p.m. (doors at 6:30 p.m.), and tickets are available to purchase for $25-40.