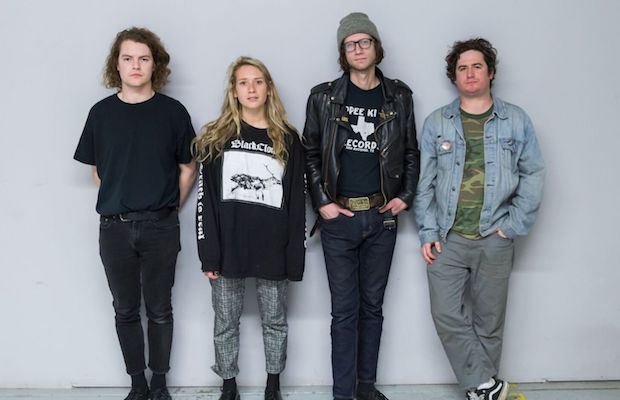 Formed a few years ago in Providence, Rhode Island, stoner punks Gymshorts have been steadily gaining notoriety through a series of strong early efforts, including their latest, Knock Knock, which dropped over the summer via Wallflower/Burger Records, as well as a busy touring schedule, sharing the stage with acts like Tacocat and La Luz. Led by singer Sarah Greenwell, the band’s surf and garage tinged flavor of punk is hard-hitting, catchy, and occasionally pretty earnest, alternating between personal tunes and party anthems, balancing raw honesty with humor and self-awareness. Out on the road in support of their latest, the band roll through town tonight, Nov. 30 to headline The 5 Spot, and, with a lighter than usually weekend slate post-holiday, this is definitely one of the best under the radar happenings we’ve come across.

Support comes from buzzy local psych/garage rock outfit Mouth Reader, who certainly share plenty of sonic similarities, poppy new local punk outfit Peachy, who we’re already obsessed with (and not to be confused with another new local college indie band, also operating as Peachy), and indie jazz/pop/rock outfit Peppermint Boys. The local talent enough would be more than worth the $7 cover, but with Gymshorts heading things up, this is a show you seriously don’t want to miss (we can always count on our pals at Cold Lunch to curate the best rock happenings). Preview all the performers below!