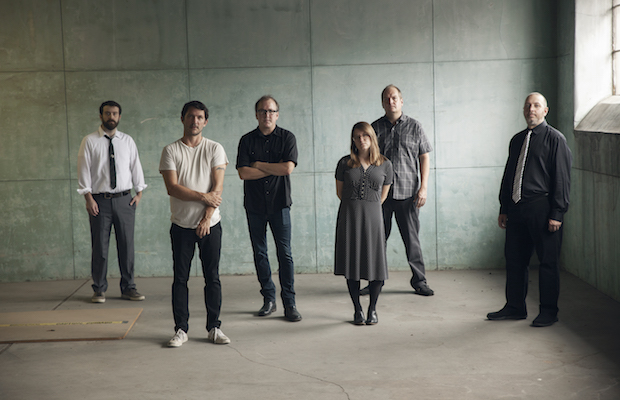 Celebrating their first album in six years (and, perhaps, best in over a decade), Omaha indie and post-hardcore pioneers Cursive return to Nashville for the first time in years, to headline The Basement East this Sunday, Oct. 21 with Chicago punks Meat Wave and buzzy up and comers Campdogzz. Responsible for some of the absolute best, most substantive albums of the ’00s indie scene, including 2003 modern classic The Ugly Organ, Cursive’s latest, Vitriloa, manages to both push past their tight conceptual focus of the last decade and a half, while also channeling some of the strongest parts of their past. Indie and emo fans of a certain age last decade are likely as obsessed with this band as we are, but if not, we encourage you to do your homework, then grab tickets to see Cursive right here! Read on for more about the whole lineup.

It’s been nearly 25 years since emo-tinged indie and post-hardcore outfit Cursive first emerged from the Omaha scene, forged by the same communal, musical upbringing that gave birth to acts like Bright Eyes, The Faint, and many, many other related, interconnected, and lesser-known projects. Though their early years showed promise and achieved regional acclaim, it wasn’t until a short break and return in the late ’90s, after which the band cemented their sound and penchant for crafting concept albums with third LP and critical breakthrough Domestica in 2000, that the Cursive of the past 20 years really found their voice. By 2003’s The Ugly Organ, arguably their best and most-beloved work, the band had attained broad, commercial success, landing in a golden era of smart, substantive, and edgy emo and indie that propelled them to enduring success. While subsequent years have seen intermittent periods of slow-down, side projects (notably, frontman Tim Kasher also crafted a few modern classics with other band The Good Life, along with some solo work, and the rest of the band have similarly ventured off to great affect), and even more recent business ventures (Cursive recently launched their own indie label, and jointly own a bar and venue in Omaha), for the bulk of their run, the band returned, like clockwork, with a new LP every three years throughout the ’00s, all with a unique concept and focus, maintaining their sound while exploring new territory, and still largely garnering praise from fans and critics alike. However, their latest, I Am Gemini, arrived all the way back in 2012 (notably, the last time they played Nashville as well), with a long-awaited followup, Vitriola, finally dropping earlier this month; the longest gap between releases in the group’s history. While the aforementioned external obligations certainly played a part, just as influential on Cursive’s latest is the general, chaotic state of the world, which they absorbed, processed, and navigated with a bit less thematic pressure and a palpable sense of patience, leading to the band’s best, most fully-realized, and impassioned effort in years, and also notably the first with drummer Clint Schnase in over a decade, and first to again feature a cello since The Ugly Organ. Cursive have always been great, but the fact that they’re sounding more nostalgic, urgent, and inspired in their personal, scream-sing, emotional, and dynamic songs than they have in years has us particularly excited for the group’s Music City return, and given the intermittent nature of their tour schedule these days, we’d urge you not to miss it.

Responsible for one of last year’s best under the radar releases, third LP The Incessant, Chicago punk and post-punk tinged outfit Meat Wave are an incredible addition to this lineup. Boasting an earnest, dynamic, and often conceptual sound that certainly bears plenty of similarities to Cursive (but cut from a cloth rooted in this decade, when they formed), the band’s driving, raw style will certainly resonate with fans of smart and ambitious and anxious punk.

Also Chicago based, but with roots deeper in the midwest, indie rockers Campdogzz are one of a handful of acts signed to Cursive’s own 15 Passenger label, who recently released their fantastic sophomore album, In Rounds. With a sound that’s rich and layered, moody and melodic, and anchored by singer Jess Price’s hypnotic voice and penchant for story-driven, and thematic lyrics, they bear a bit more resemblance to Kasher’s other band, The Good Life, or at least the more heady and soft moments of Cursive, but, still, should squarely land with fans of the rest of this bill. Show up early and see what they’re all about!