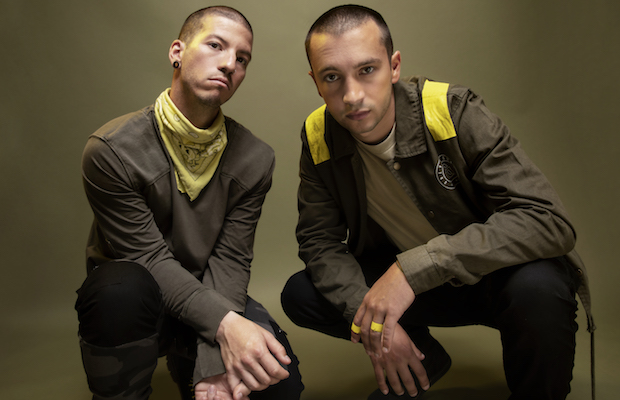 Few if any rock bands this decade have seen a rise as stunning and well-deserved as Columbus, Ohio alternative/indie/hip hop/punk/electro duo twenty one pilots, who, after a few years of regional and underground pop punk scene acclaim and constant touring, broke out in a major way with 2013 third LP and Fueled By Ramen debut Vessel. Their swift ascent since has been particularly apparent with their Nashville stops in recent years, selling out a string of successive dates, only to return to a significantly larger room each time: 12th and Porter in 2012 and ’13, Cannery Ballroom in 2013, Marathon Music Works in 2014, The Ryman in 2015, and Ascend Amphitheater the following year, and most recent stop in Nashville proper.

With 2015’s Blurryface, TOP furthered their mainstream, crossover appeal, earning their first Grammy and scoring a huge radio hit with non-album single “Heathens,” building on years of growing buzz and niche stardom to catapult them to becoming one of the biggest rock bands on the planet, and with brand new followup Trench, they continue to stay true to their weird, unique roots while honing their anthemic, pop-primed appeal. Returning to Nashville after two years, it should come as no surprise that the duo are set to headline Bridgestone Arena for the first time tonight, Oct. 16 with anthemic, electro/alternative outfit AWOLNATION and indie pop up and comer Max Frost. Previously sold out, a handful of tickets (including both cheaper upper level seats as well as GA floor seats as of writing) seem to have been released, and surely won’t last long; snag ’em here!

If you’ve never seen twenty one pilots live, or your only exposure is to their singles on the radio, we urge you to dive a little deeper and perhaps YouTube a few live videos, because their show is an engaging, unpredictable, electrifying rock and roll experience like no other, and one that has managed to surprise and elate us numerous times at all sizes of venue and festival stage. TOP are the real deal, and in a climate where rock has largely left the pop culture conversation, it’s encouraging to see them finding such huge, enthusiastic success; catch their biggest Music City show yet, and see what all the buzz is about!

twenty one pilots, AWOLNATION, and Max Frost will perform tonight, Oct. 16 at Bridgestone Arena. The show is all ages, begins at 7 p.m., and tickets are available to purchase for $34.70-79.50.