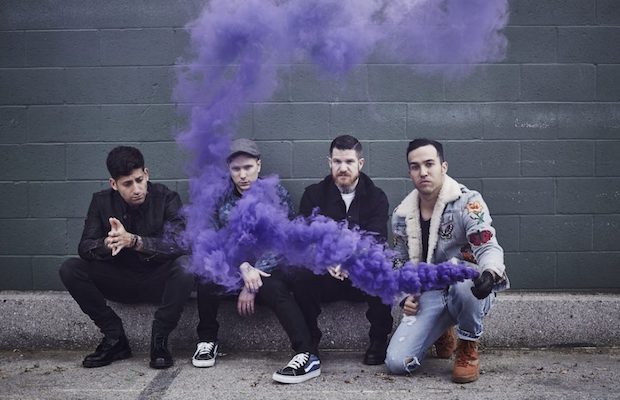 Returning to Music City for the first time in more than three years, out in support of their seventh full-length and first release in just as long, M A N I A, pop punk trailblazers turned anthemic, pop rock staples Fall Out Boy are set to headline Bridgestone Arena tonight, Sept. 11, along with breakout rapper Machine Gun Kelly and longtime FOB cohorts Gym Class Heroes. Since first reuniting in 2013 (and playing The Ryman and a surprise television taping at Rocketown that same year), Fall Out Boy, over the course of their three latest efforts, have really managed to eschew their hardcore-influenced, widely accessible pop punk origins, gravitating towards more radio-friendly, electronic and sample-infused, hook-laden pop faire, making them an enduring and adaptable act at a time rock has largely disappeared from the mainstream.

With M A N I A, the band are at their most pop indulgent, building upon the bigger hits of prior release American Beauty/American Psycho, to craft a lean, modern effort which, anchored by frontman Patrick Stump’s unmistakable voice and bassist and lyricist’s Pete Wentz’s penchant for poetic, personal, biting, and pop culture-obsessed songwriting, still feels like at least a distant cousin to the group’s earlier work. Though diehards of the old stuff won’t get a ton of nostalgia on this tour (a few classics remain set staples, however), if you’ve come onto to FOB more recently, or have connected with their new direction, the bulk of that work coupled with the most gigantic and epic production they’ve achieved yet makes this a marvelous, must-see arena spectacle. Paired with talented rapper and actor Machine Gun Kelly, a growing favorite in recent years who’s had a particular boost in recent weeks thanks to a feud with Eminem (FOB always like picking unique supporting acts), along with rap, rock, and emo-tinged favorites Gym Class Heroes, long overdue for a new record, and this is one of the last essential shows of the summer. Grab tickets here!