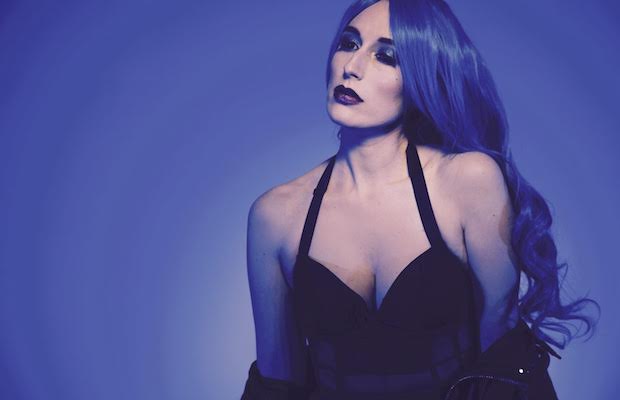 When last we checked in with Nashville native and rising singer-songwriter Tanya Montana Coe, she had just released her excellent, deeply personal debut, Silver Bullet, in 2015, which fused her country and blues roots (notably, her father is acclaimed outlaw country singer David Allan Coe) with more expansive pop and r&b sensibilities. Since then, Tanya, a veteran of our Acme showcase series and the owner and operator of the trendsetting Goodbuy Girls clothing store, has a undergone yet another artistic transformation, emerging from a short-lived creative rut with a dreamy, electro-tinged new sound for her forthcoming sophomore album.

Re-teaming with longtime collaborator, multi-instrumentalist Shane Tutmarc (of Solar Twin), who co-wrote and produced her first LP, Tanya recently released a shimmering and confident new single, one she describes as “the perfect love song for the modern age,” called “Electric Blue.” A stylish and creative effort, Coe has crafted a new music video for the track, directed by Tutmarc and featuring Brianne O’Neill of Black Moon Mother and visuals from Kari Leigh Ames of Labrys Light Show, which we’re thrilled to exclusively premiere!

On the song and video, Tanya tells us:

“‘Electric Blue,’ to me, is a song about believing in yourself and looking forward to the future. I had been in a little bit of a creative rut after the release of my debut album, Silver Bullet, not really knowing what to do next musically if anything at all. Even after writing and recording an album that I am extremely proud of and playing some great shows with lots of positive feedback, I didn’t consider myself an artist, I didn’t believe in myself in that department. I constantly compared myself to other artists and musicians and thought, ‘I’m not as skilled as them, I can’t be all in like them, maybe I don’t deserve to call myself an artist,’ and maybe I don’t, but what I do know is that at the height of these feelings one sunny day last summer, I was outside painting my nails metallic blue and this song (melody and lyrics) literally just showed up in my mind and I started singing it and immediately got that rush of adrenalin that happens when your creative juices are flowing and at that moment, I knew I was back. For the video, I wanted a slow dreamy abstract psychedelic mind trip vibe and I had seen Labrys Light Shows live before and knew that Kari Leigh Ames could provide the perfect backdrops. My longtime friend and collaborator Brianne O’Neill of Black Moon Mother agreed to be in it with me, we dressed like twins in all white so the projections would show up and we just had fun with it! Shane Tutmarc was the best person to direct and edit it because he knows my artistic vision more than anyone else and I trust him completely.”

Watch the dreamy, ethereal new video for Tanya Montana Coe’s “Electric Blue” right now, and keep an eye out for new tracks and album news in the coming months!