The Avett Brothers, The Head and the Heart, Drew Holcomb & More to Play Moon River Fest | Sept. 8-9 in Chattanooga 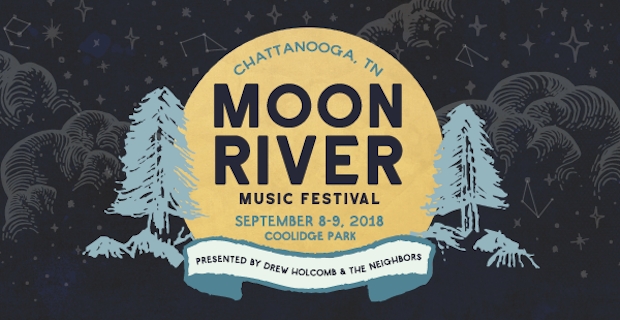 After taking 2017 off to focus on expanding, the Moon River Music Festival, founded in 2014 by local Americana rocker Drew Holcomb, is set to return later this year with a new home and its best lineup yet! Though the first three years of the fest took place in Holcomb’s hometown of Memphis, setting attendance records and creating a community vibe at the historic Levitt Shell, the event has now outgrown its original space, and will be hopping all the way to the other side of the state to Chattanooga’s Coolidge Park on Sept. 8 & 9.

Holcomb views the move as a further celebration of his home state, explaining in a statement that “Chattanooga is primed for a music festival like Moon River, and the city has opened its arms to us. It is the gateway to the Appalachian Mountains and one of the most beautiful cities in the region. Coolidge Park is right in the center of town, connected to one the world’s largest pedestrian bridges, Walnut Street Bridge, overlooking the Tennessee River.”

This year’s lineup, which was just announced, is set to feature The Avett Brothers, The Head and the Heart, Drew Holcomb & The Neighbors, Judah & The Lion, Trampled By Turtles, Margo Price, Mavis Staples, I’m With Her, The Dirty Guv’nahs, Joseph, Mandolin Orange, Penny & Sparrow, Durand Jones & The Indications, The Secret Sisters, The War & Treaty, Darlingside, The Ballroom Thieves, CAAMP, Liz Vice, Boy Named Banjo, Wilder, and more, making for a well-curated and Americana-leaning bill, set to perform across two stages over two days.

Tickets go on sale this Thursday, March 22 at 9 a.m. CDT right here, with both general admission and VIP options. In typical festival fashion, GA pricing is tiered, so the earlier you buy, the more you’ll save. Check a recap of the most recent event, 2016, and look out for more about Moon River as the regional fest’s fourth installment inches closer!