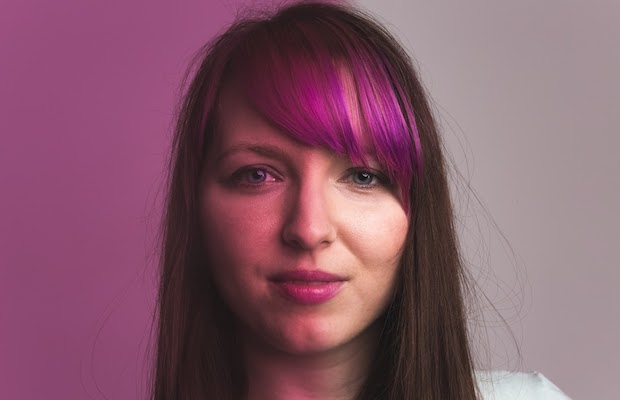 Local indie folk pop singer-songwriter Kelly Hoppenjans captured our attention last year with her wonderful, personal, and eclectic sophomore EP, Dreaming Is Easy, which earned praise within the local scene and national press, and saw her hit the road to tour in support. As the Nashville transplant looks towards a transitional new year, which, next, will feature a spot in the annual Road to Roo competition, she’s given us a chance to present you an exclusive premiere of her unique and surprising new cover of famed Metallica hit “Enter Sandman,” before it officially drops tomorrow.

On the inspiration for this unexpected song choice, Kelly tells us “My producer and I set out to find a cover where we really reinvented the feel of the original while still remaining true to its spirit. ‘Enter Sandman,’ as Metallica wrote and intended it, is all about an insidious, maniacal bad fairy of a bogeyman who attacks children while they sleep. Its dark and twisted nature remains in my version, but I embraced more of the creepily seductive side of the song. I imagine it like a horror movie, where my version is the suspenseful calm before the monster jumps out of the shadows. I was equally influenced by Fiona Apple, Adia Victoria, Ennio Morricone, Angelo Badalamenti, and the song Sarah Jessica Parker sang to lure children to her in Hocus Pocus.”

Co-produced by Jim Reilley and Hoppenjans, and engineered by Eric Fritsch, the reimagined track showcases Kelly’s more ethereal, poppy side, anchored by her incredible, hypnotic, and conventionally powerful vocal prowess. Though far from the first metal song reworked to juxtapose the sensibilities of  a sonically disparate artist, Hoppenjans certainly puts her own stamp on this cover in a memorable way, giving an even more experimental stamp than her fanatic originals.

Only the first taste of forthcoming new music, Kelly informs us that this is going to be a productive new year: “2018 is going to be a building year for me. I did a few tours last year following the release of my EP Dreaming is Easy, and I’m expanding my touring this year to Georgia, North Carolina, South Carolina, Kentucky, and Ohio, for starters. I’m also releasing two more singles in the spring– a couple of originals that didn’t fit on my last EP but I still wanted to share. Finally, I’ve been writing tons and am hoping to start recording for a full-length album this year.”

Hear Kelly Hoppenjans’ cover of “Enter Sandman” below, and keep an eye out for more new music in the near future!