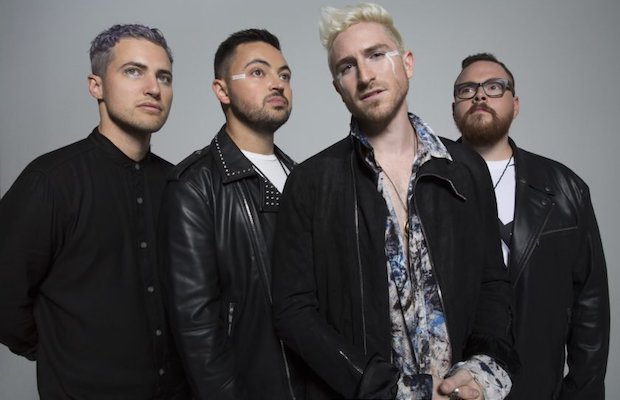 Returning to Nashville proper for the first time since 2015, breakout Cincinnati pop rockers Walk the Moon are slated to once more headline The Ryman Auditorium on Jan. 28, with support from reunited Chicago indie rock trio Company of Thieves. Out in support of their recent fourth full-length What If Nothing, the highly-anticipated followup to their breakout 2014 effort Talking Is Hard, Walk the Moon are known for their theatrical, visual, and dazzling live performance style, refined from years on the road. Tickets to their latest Music City stop, one of the year’s first essential major shows, are still available here, but we’re thrilled to announce that we’re also giving away a pair of tickets to one lucky fan! Read on for more about the show and enter for a chance to win below.

Formed more than a decade ago in Cincinnati by frontman Nicholas Petricca, breakout pop rockers Walk the Moon have been a buzzworthy fixture in the crossover rock landscape since first finding acclaim following their 2010 self-released debut, I want! I want! To many in the indie world and blogosphere, their introduction came in the form of buzzworthy early single “Anna Sun,” which single-handedly garnered high praise and landed them prominent tour and festival slots, in turn boosting the group’s presence thanks to an electrifying, engaging, high-energy live show. Soon inking a deal with RCA, the band dropped their eponymous major label debut in 2012, re-releasing “Anna Sun” and finding another breakout hit in “Tightrope,” while continuing to play bigger tours, every festival under the sun, and make early TV appearances. It was 2014’s Talking Is Hard, however, without breakout track “SHUT UP + DANCE,” that catapulted Walk the Moon to certifiable rock star status, earning awards attention, making them even more in-demand on the late night and festival circuit, and finding ubiquitous radio attention, increased critical praise, and a mainstream following. Combining huge pop hooks, synthy, retro, and dance worthy rock sensibilities, and plenty of slick, radio primed production, Walk the Moon have proven to be one of the most dynamic, enduring, and hardworking bands of the past several years, and their success story is more of a gradual and deserved accession to those who’ve been paying attention. Released late last year, the band’s latest, What If Nothing, keeps the momentum going, and we couldn’t be more thrilled to hear their latest alongside old favorites when Walk the Moon return to Nashville proper for the first time in over two years.

Since quietly grinding to a halt in early 2014, three years removed from their sophomore album Running from a Gamble, it’s seemed like Chicago indie rockers Company of Thieves were destined to become a short-lived musical footnote. Then, last summer, the trio mounted a surprise return, dropping a new single, “Treasure” (below), their first in six years, and plotting a fall tour. The band, who self-released their debut Ordinary Riches in 2007 then subsequently re-released it in 2009 after jumping to major label Wind-up Records, have long been a critical darling and wonderful live outfit, and we’re thrilled to see their reunion extended to 2018 with a supporting spot on this tour. Show up early!

Winner will be announced Thursday, Jan. 25 at 5 p.m. CDT, and will receive one pair of tickets. Good luck!