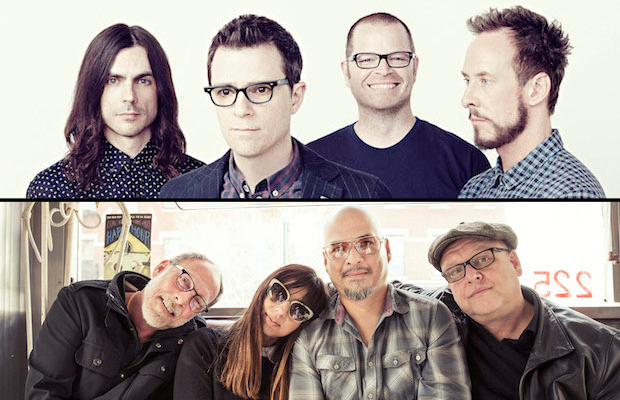 Two gargantuan rock acts and no strangers to Music City in recent years, Weezer and the Pixies have announced a massive co-headlining summer run for 2018, which hits Ascend Amphitheater on July 28. Among the first shows announced so far for Ascend’s summer ’18 slate, tickets are set to go on sale Friday, Nov. 10 at 12 p.m. CST right here, with various pre-sales beginning as early as Monday, Nov. 6.

At this point, seminal alt rock icons the Pixies have been reunited longer than the the 11 years they were broken up, and much longer than the seven that comprised their original, prolific run. It wasn’t until 2014, however, a decade after they first got back together, that the group finally released a new full-length (at first, as a series of EPs), and have become increasingly more active ever since. The wait for another modern-era LP from the band, who now count Paz Lenchantin among their ranks after 2013 departure of Kim Deal, was thankfully much shorter, with their seventh album, Head Carrier, arriving last year. They played The Ryman this spring in support.

While the Pixies’ initial ’80s output inspired a whole ’90s alt rock movement, their wide-recognition seemed to gain traction while they were on hiatus. It was during those very years that Weezer, formed in 1992 in LA, broke onto the scene with their own power pop, alt rock, and proto-emo sound, finding huge success with 1994 debut the “Blue Album,” and 1996 fan favorite Pinkerton, initially polarizing but since regarded a classic. From the early ’00s on, they’ve been incredibly prolific, continuing to find mainstream success, take risks, and attempt periods of reinvention. They just released their 11th album, Pacific Daydream, but are already eyeing early 2018 for a 12th: the “Black Album.” The band played Ascend last year and have also appeared at The Ryman, Pilgrimage Fest, and, most recently, Forecastle, over the last few years.

The Dangerous Summer to Play The High Watt Jan. 24