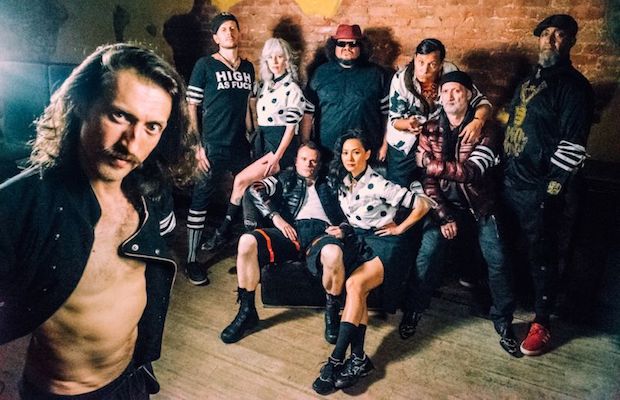 For over 15 years, Gogol Bordello have been blending elements of Eastern European Gypsy music with folk, dub, and punk, to create a unique and culturally transcendent sound that is only intensified by their high-energy, wildly entertaining live show (and unstoppable work ethic). Made up of musicians from all corners of the world and helmed by Ukrainian, Servitka descent Eugene Hütz, Gogol Bordello claim New York’s eclectic Lower East Side as their point of origin. With seven full-lengths, most recently this year’s explosive Seekers and Finders, countless television and festival appearances, and worldwide marketing partnerships under their belts, Gogol are as accomplished as they are seasoned, but don’t think for a second they’ve lost any of their bite: their live show is still wild and unpredictable, which is why their return to Marathon Music Works tonight, Nov. 2 is sure to be a blast. Tickets are still available here, and high-energy, brassy funk group Lucky Chops open. Don’t miss out!

Gogol Bordello and Lucky Chops will perform tonight, Nov. 2 at Marathon Music Works. The show is all ages, beings at 8:30 p.m. (doors at 7 p.m.), and tickets are available to purchase for $25-30.