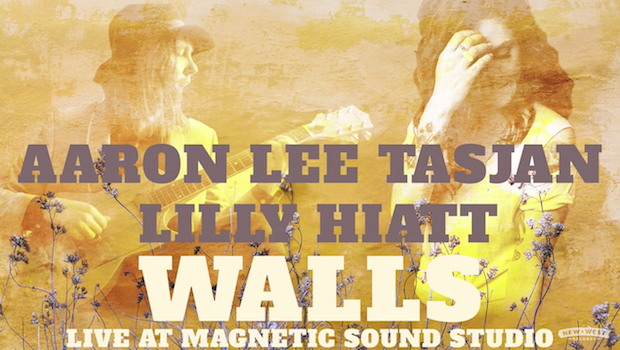 Ever rising East Nashville alt-Americana songwriter Aaron Lee Tasjan and soaring local songwriter Lilly Hiatt are no strangers to collaboration, as we found with their Third Man Record supported Luck Mansion Sessions earlier this year, and they have again teamed up for a timely release of the Tom Petty (R.I.P.) single “Walls.”  Recorded in the summer of 2017 at East Nashville’s Magnetic Sound studio, just as Hiatt was gearing up to release her highly-acclaimed Trinity Lane and Tasjan was riding high on his 2016 record, Silver Tears, “Walls” was chosen because both (and their bands) are big-time Petty fans (who isn’t, really). Tasjan explains, “The melody is as timeless at the Everly Brothers, and thought it would be a great fit to sing as a duet,” and he continues with the apt and true statement, “Tom’s music really brings people together, and we were happy to be singing one of his many incredible tunes together that day.”  Hiatt expanded on the events that unfolded on that rainy summer day in the studio, “Guards came down and magic followed.  It was pouring rain all day and I felt gleeful, like a little kid. I  think we all did.  Some days are diamonds, and this certainly was one of those.  Tom Petty, you will be greatly missed.”

If you are like us, you’ve been reminiscing Petty’s songwriting genius with endless playlists of singalong hits, and the “Walls” duet below is worthy of an add.  You can also purchase the song at either Tasjan or Hiatt’s bandcamp pages, with proceeds from sales of the song going to Music Health Alliance in Petty’s name.  If you are looking to catch Hiatt or Tasjan in Nashville, the former will be performing as part of the Nashville Gives Back benefit for the victims of the Las Vegas shootings at Mercy Lounge on Oct. 9.  No dates on the books for Tasjan right now, but we’d expect something to come around before the end of the year.