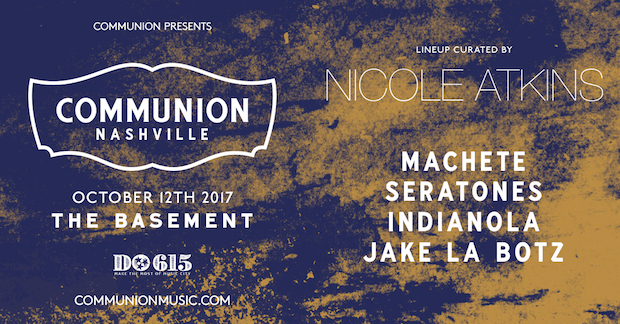 Communion’s showcase series has been going strong in Nashville for a few years now, and the record label has introduced a fresh change to the format recently with notable Nashville artists curating the event. Last month, The Weeks rounded up a handful of their favorite artists. On Oct. 12, Asbury Park to Nashville transplant Nicole Atkins showcases her stellar taste with a lineup that features Machete, Seratones, Indianola, and Jake La Botz at The Basement.

A few tickets are still available here, and we’re also giving away a pair of tickets to one lucky fan, so enter below, and keep reading to find out more about the lineup.

Psychedelic garage rock band Machete are generating buzz on the strength of their local shows and the incredibly talented lineup, which features members of The Ettes & JP5 (Jem Cohen), Secret Club (Nate Moran), Clear Plastic Masks (Matt Menold), and songwriter Mick Leonardi. The band have been recording at The Bomb Shelter, and even though the tracks have yet to see the light of day, we’re anticipating hearing new music from them live on Oct. 12.

Winner will be announced Tuesday, Oct. 10 at 3 p.m. CDT, and will receive one pair of tickets. Good luck!