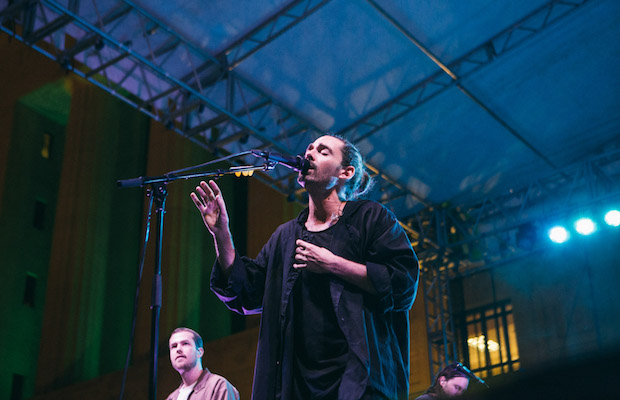 After setting a high bar with a great first week featuring St. Paul & The Broken Bones, Michael Franti & Spearhead, and Arkells, Live on the Green managed to keep the excitement rolling in week two, with a stacked spread of Local Natives, Real Estate, and Minus the Bear, three acts we’ve covered extensively on their own. Certainly a more rock and indie oriented bill, from top to bottom the Aug. 17 edition was one of our favorites ever, and despite a little uncooperative weather, it’ll be sure to go down as one of this season’s top moments; especially since it marked a LOTG milestone- the long-running local fest’s 50th show. Before we reach the halfway point on Aug. 24, and wind-down with a three-day weekend beginning the following Thursday, check out our review and photos from Live on the Green 2017 week two below!

Though this season’s lineup is as strong and diverse as ever, I’m especially excited to see all of the indie, alternative, and punk-informed acts scattered in, with the second and third weeks of the season ranking among my favorite LOTG billings ever. In fact, I was a bit in awe to see Minus the Bear on the bill at all; a group I’ve loved for over a decade, they don’t seem like a band the general free fest attendees would know, but leave it to Lightning 100 to be the ever dependable curators of quality. Week two admittedly didn’t have the same all ages, mass appeal, and musical spread of last week, and, as a result, it didn’t feel quite as well attended. The still decently sized crowd made up for it in pure enthusiasm, however, clearly delighting in getting to see three bands who’ve played many a ticketed Nashville show in the past together, playing full sets, for free. 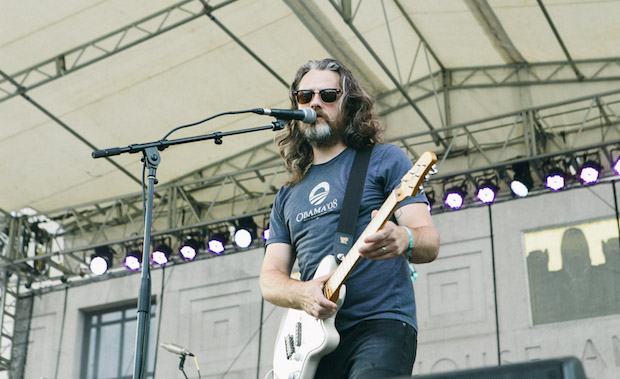 Minus the Bear. Photo by Amber J. Davis.

It’s been a little over two years since Minus the Bear last played Nashville, for a pretty phenomenal Menos el Oso anniversary show, and though that was one of my favorites in more than a decade of seeing them play, I realized it’d been about five years since I last caught a career-spanning set. I was beaming with excitement as I arrived, just as the band kicked into new tune “Give & Take,” planting myself to the rail so I could soak up every second up close. Admittedly, I haven’t spent nearly enough time with their latest LP, VOIDS, but the new stuff, which they played a healthy amount of, definitely soared. The Seattle outfit treated LOTG as if it were any old festival show, and there was anyone in attendance not feeling it, they were well beyond my line of sight. Old tunes like “Absinthe Party at the Fly Honey Warehouse” up to fan favorites like “My Time,” “The Game Needed Me,” and “Pachuca Sunrise” all sounded as inspired and flawless as ever, and the band’s dynamic still felt fresh after all these years, guitarist Dave Knudson manipulating sounds like only he can, keyboardist Alex Rose stepping more into lead vocal territory, and new touring drummer Joshua Sparks beaming from ear to ear while holding down the complex, oddball rhythms that propel the band’s unorthodox style. By the time they got to “Last Kiss,” met with exuberant cheers from the crowd, I found myself wishing for more, despite fest giving openers a healthy full hour set. I’d be hard-pressed to think of a Live on the Green first act I’ve ever loved more, and though the rest of the night had nothing but impressive performances in store, had the evening ended there, I would most definitely have still left happy. 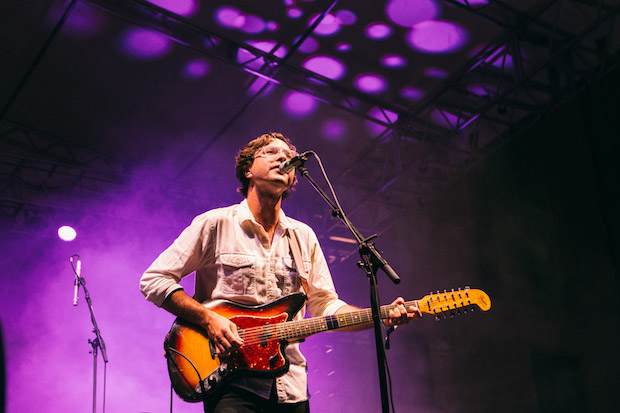 Taking advantage of the long changeover to grab some food, I was eagerly looking forward to Real Estate, despite seeing (and loving) them just last month at Forecastle Fest. Though the lineup order made sense in draw and caché, I heard more than one person express that they thought Real Estate should be headlining, and given the amount of local tastemakers and prominent artists I spotted side stage for their set, I’d say their mounting buzz is at an all-time high with gorgeous new effort In Mind. With the departure of guitarist and founding member Matt Mondanile, Real Estate are seemingly at the start of a decisive new chapter, and Julian Lynch, though new to the band, is clearly a long-time friend and collaborator, already having seamlessly assimilated into their ranks, and blended his own style and personality into their sound. Core members Martin Courtney (vocals, guitar) and Alex Bleeker (bass, vocals) are also doing their part in keeping the band feeling energized and exciting, and this outing, though not far-leap from what I saw last month, had a bit more sonic intrigue, a less inhibited approach, and bit more experimentation- a byproduct of having a headliner-length set time. The band doubled down on crafting their lush and engaging instrumentals, often letting the crowd do the lifting in singing along, touching on old favorites like “It’s Real” up to stellar new tunes like “Stained Glass” and everything in between. Coming off the high of Minus the Bear, I went in with standards raised, and Real Estate deliver delivered the best performance I’ve seen them play yet. 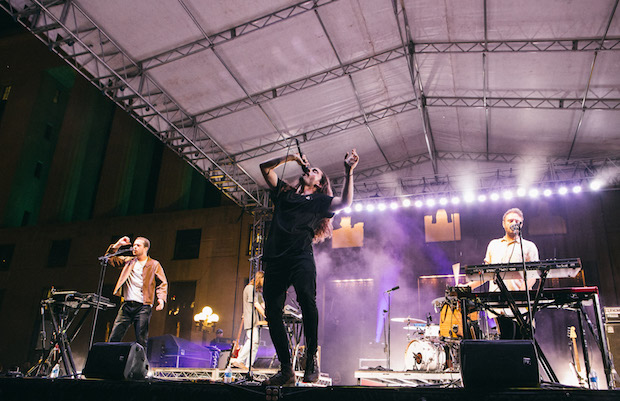 As if perfectly synced up, the rain clouds that had been looming during Real Estate finally opened up as their set concluded, managing to only rain during changeover, and allow for Local Natives to take the stage about on time as scheduled. The LA group delivered one of my favorite Live on the Green sets ever in 2013, and though I’ve been lucky to see them several times since, I was very much looking forward to their return, deservedly in top billing. Last time around, fueled by the buzz of sophomore effort Hummingbird, the indie rockers were doing their part in proving beloved debut Gorilla Manor was more than a fluke, experiencing a quick ascent while also performing with the fire of a band set out to prove that they’re worth the hype. Four years removed, and with a great, if perhaps somewhat underrated, new effort, last year’s Sunlit Youth, to their name, Local Natives are an established and accomplished force, and watching from as close as I’ve been since, well, probably last LOTG, I really noticed just how confident and commanding they’ve become. Kicking into to new cut “Jellyfish,” before dialing it back to “Wide Eyes” (I admit, that alone cemented it for me), the group played with their signature subdued cool and their groovy, genre-bending, and layered sound had the diehards and casual newcomers alike hooked immediately. There seemed to be a bit of confusion in the way it was introduced, but Local Natives weren’t the 50th LOTG performer, but rather the headliners of the 50th LOTG showcase (there’ve been over 150 performers by now), and they proudly accepted the mantle, acknowledging that it was just by chance. With another stellar lineup on the way for week three, Local Natives kicked it up a notch yet again, ending what was, from start to finish, an exceptional night of music. I snuck off before the encore to hail an Uber, but as I jumped in my car, I could hear “Sun Hands” in the distance, bringing back memories not only of the group’s last Live on the Green, but of the smaller Nashville shows they played before they broke out. What a great night!

Live on the Green continues this Thursday, Aug. 24 with an impressive lineup of Spoon, Portugal. The Man, and The Weeks. Keep an eye out for a full preview later this week, along with our coverage after the show. And, as always, head to LOTG’s site for more info.