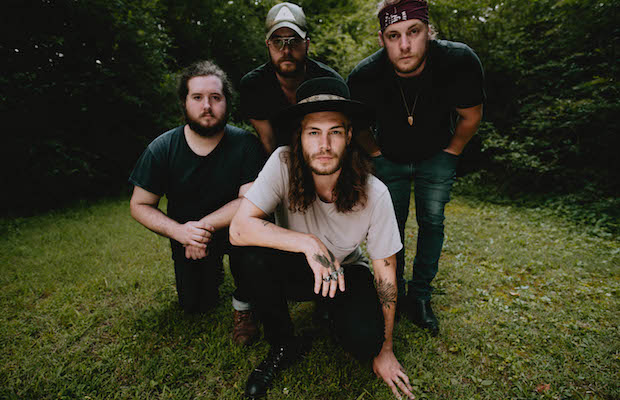 We’ve been enjoying southern rockers Heathen Sons since they first caught our attention in 2015, when they melted skulls at our Acme showcase. The group continued to perform around town frequently after, only recently retreating to work on new music. Now they’ve re-emerged, after some time shutt away in the studio, and the end result is their highly-anticipated, debut, self-titled LP, slated for a Sept. 8 release via Metropolitan Groove Merchants.

With a sound that blends all the best bits of early Kings of Leon, with the less depressing parts of Ryan Adams and the Cardinals, Heathen Sons are instantly likable and a perfectly pure Americana rock band you should have in your life, if you’re not already hip to them. Of course, you don’t have to take our word for, because the band were excellent enough to let us debut their live in-studio video for stellar new track “Futures,” which you can watch below.

“I wrote this song not knowing it was basically a prayer,” Joshua Huggins of the Sons said. “I had no intentions for it [to] be that nor did I know until I finished it and listened back.”

If you pay attention to the words as you listen, you’ll begin to understand just what kind of prayer he is speaking of. So, click on after the jump for our premiere of “Futures,” and mark your calendars for the Sept. 8 release of the band’s eponymous debut. When the day finally comes, you’ll be able to enjoy the featured track with eleven other original songs, plus some special bonus East Side Sessions recordings. No word yet on a local release show, but knowing these guys, one will likely materialize shortly.