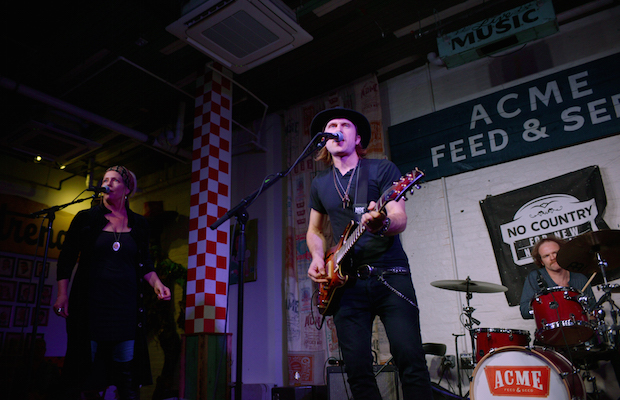 We would like to continue to welcome all of you reading this, out there in Music City and beyound, to Acme Feed & Seed every Tuesday night, for our weekly showcase from our live events wing, No Country Presents! Our latest installment featured eclectic singer/performer Marcella Simien, southern rock ’n’ rollers Heathen Sons, and guitar shredder Matt Walberg and his band The Living Situation. Read on for a recap, and for some great shots from photographer Mary-Beth Blankenship. Also, don’t miss the next showcase, on Tuesday, April 7, featuring Femke, Joshua Fletcher, and Will Dailey.

With the Nashville Predators back, playing at home, fine tuning their game before a (hopefully) deep post season push, downtown would have already been crazy. Throw in evening temperatures in the low ’70s and pop-country superstars Florida Georgia Line filming a Mountain Dew commercial (on Acme’s roof for that matter), and you have a recipe for what is called a Broadway clusterfuck. No matter, I took Lyft, so parking wasn’t a problem, but traffic still made me ten minutes later than I would have liked to have been.

Right off the bat, it was obvious we were all going to get something a little different from the first performer, Marcella Simien. Nearly 7 p.m. on the dot, with little or no soundcheck to speak of, she and a bandmate were parading through the large dinner crowd. She was playing her accordion and he was beating a marching drum. Marcella’s bounding energy and smile, combined with the circus like accordion sounds, reminded me of a jester in his or her court. After some more brief shenanigans, they were back on stage doing a more traditional set; she playing keys and her partner (Rory Sullivan) mostly keeping to guitar. Her chilled out, soul/folk/roots vibes, fronted with her Grammy winning pedigree singing–daughter of former winner Terrance Simien– was the perfect blend of awesome.

During a break in the music, Rory mentioned that the two of them were in from Memphis, they played together in band back home called Marcella Simien & Her Lovers, and it was their first time performing in Nashville, on Broadway no less! Not too shabby at all. They blazed through their short but sweet set, including an original song that saw Marcella playing a frottoir … yeah I had to look it up too. Basically it’s a washboard looking piece of thin metal warn over ones shoulders, played by scrapping finger/picks agains the surface. Pretty bad ass, especially in the originality department. They also managed to sneak in some great covers, including “Son of a Gun” by the Vaselines, and “Hook and Ladder” by Nancy Sinatra. And as quick as they burst into the showcase, they were gone, but the night was only getting started. 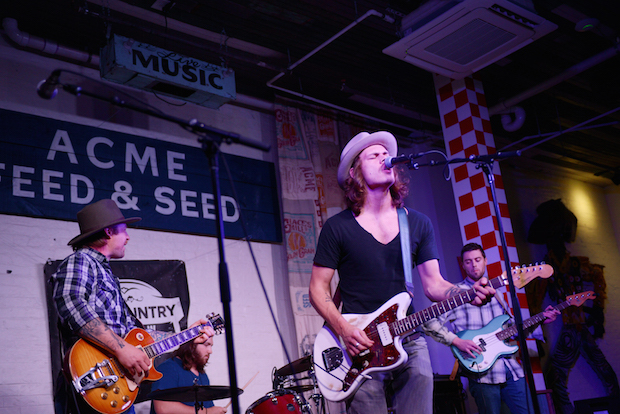 After a short break in the action, it was time for Music City resident rockers Heathen Sons to take the stage. I’ve heard there name around town, but this was my first time seeing them. Pretty much everyone who’s mentioned the band has said they rock, and those people are not joking. The beautiful lead guitar work, especially when he unsheathed his Les Paul, was what I noticed instantly. The group’s sound is pure southern rock ’n’ roll, with just a dash of alt-country for good measure. They powered through some originals, doing their best to play to the dinner crowd, and not explode any ear drums … but it was obvious they could be much, much louder. Heathen Sons reminded me a little of early Kings of Leon, and right as this thought occurred to me, they broke into a KOL cover, “Four Kicks.” Very Nice.

During a couple songs they broke down some extended jams too, showing yet another phase of their game. Overall I was super impressed, and look forward to seeing these guys around town for awhile. You should jump at any chance to you get to see what they are all about. After their set, the ground floor of Acme seemed extra crazy with hustle and bustle. Various crew members for bands, TV, and catering were loading things in and out all around. People were packing in, eager to enjoy some food, refreshment, and, of course, the music. It felt good to be alive. 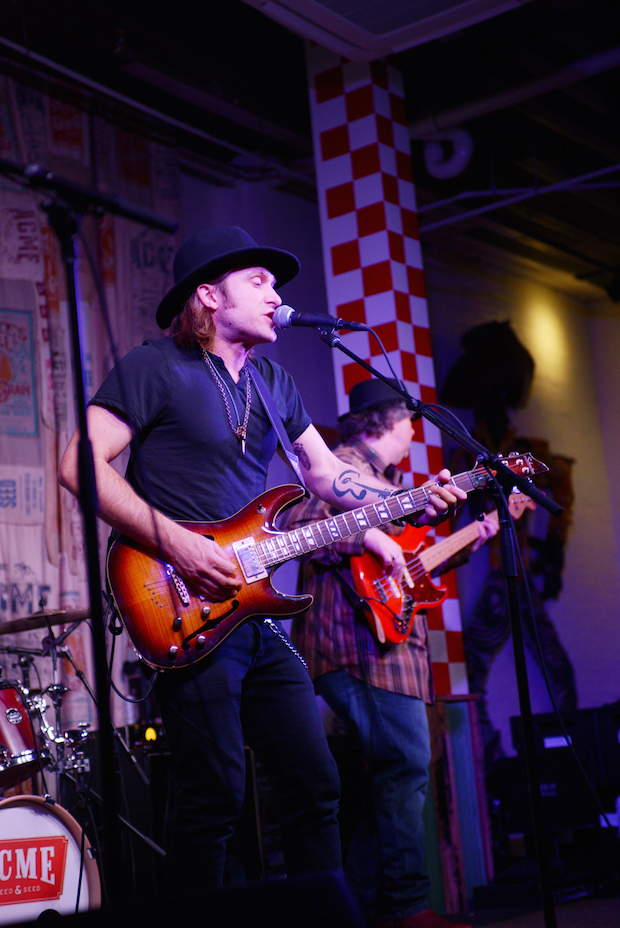 The headliners of the evening, Matt Walberg & The Living Situation, kept the party going with little delay. Mr. Walberg, was obviously a very seasoned performer, or he played the part well. He was extremely comfortable on stage, as he thanked his hosts, and jokingly thanked locals in the crowd for hanging out on Broadway. After a couple songs, he checked back in with crowd, getting a Preds score update (they would lose in overtime); apparently he’s a big fan. Of course, it was really all about his amazing, professional studio level guitar shredding. He played every style, and following the trend of the night, he played some amazing covers. In fact, Walberg even joked at one point about how it was a law; you had to play some covers if you were going to play on Broadway at all.

Peppered in were some solid originals worth looking into here, but The Living Situation is a newer project for Matt, more a collective of local playing friends than a set band. Later, when I was talking to him out front, he said it was the first time they’d performed with a drummer. Pretty amazing, considering how fluid they’d looked to me. Highlight covers included “Money For Nothing” from Dire Staits, “Lonely Boy” by the Black Keys, and Tom Petty’s “Runnin Down A Dream.” Each one was laced with seriously sharp, jammy guitar solos that nearly made my head spin. Dude can straight up play. Look for more from him in the very near future, and, as always, join us every Tuesday at Acme for our free showcase!