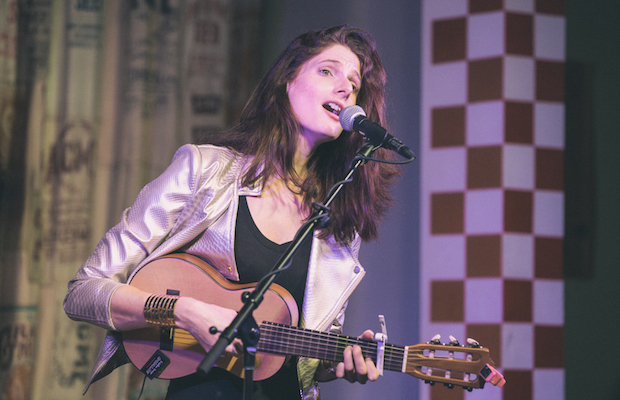 By now we hope you’ve heard, our live events production wing, No Country Presents, has taken up residence at Lower Broadway’s hippest new restaurant, lounge, retail, and event space, Acme Feed & Seed, where we’ve been bringing you a weekly, FREE, Tuesday night showcase, featuring some of our favorite emerging local and national talent. The curated showcase runs from 7 to 10 p.m. each week, and, so far, has featured everything from folk to funk to rock to indie. For our next installment, on Tuesday, April 7, we’re bringing you our very first return artist, local indie pop singer Femke, along with indie Americana singer Joshua Fletcher and eclectic Boston singer-songwriter Will Dailey. Keep reading to find out all about them, and cancel any other plans you might have Tuesday night, because you’re coming to hang with us. Got it?

Femke Weidema first came onto our radar as part of folk/Americana group Cotton Wine, but, with her latest musical outlet, simply dubbed Femke, she’s shifted to an infectiously poppy, synth-laden new full-band sound that we absolutely love. Hailing originally from The Netherlands, Femke first fell in love with pop music at a young age, and performed across Europe before the pull of the Berklee College of Music brought her stateside. After a stint recording and writing in LA, she landed in Nashville, and, most recently won a Latin Grammy for her work with Beto Cuevas on Transformation. The singer’s many years of writing and collaborating with other artists seems to have only helped hone her voice, and her latest batch of songs, which arrive ahead of a new album, are some of the best pure pop we’ve heard come out of Music City in awhile. Femke blew us away back in January, and we were so impressed, that we’ve invited her to perform all April long!

Hailing from the suburbs of Atlanta and now residing in Nashville, singer-songwriter Joshua Fletcher is prepping to release a new full-length called Ready, Aim, produced by The Damnwells’ Alex Dezen, on May 26. Though he grew up a fan of punk rock, Fletcher gravitated towards folk, country, and Americana as he fell into his own as a songwriter, but, with his latest batch of songs, is said to be exploring a more modern sensibility, incorporating elements of rock and pop, with a deeply personal focus. Expect plenty of new tunes to be on full display at Acme.

Boston based singer-songwriter Will Dailey is the latest touring artist we’re pleased to welcome to the Acme stage, and we couldn’t be more excited to have him. An incredibly accomplished writer and performer, Dailey’s music has been featured in countless television shows, and he has the distinction of winning five Boston Music Awards. Dailey was previously a major label artist, prolifically releasing tons of material over the past decade, but, with his latest, 2014’s National Throat, he opted to return to his independent roots, and self-funded the fantastic album using PledgeMusic. Channeling a rootsy, pop-accessible rock sound, Will Dailey is one artist you absolutely need to show up on time for.

Femke, Joshua Fletcher, and Will Dailey will perform Tuesday, April 7, at Acme Feed & Seed. The show is 21+, music begins at 7 p.m., and, per usual, it’s totally FREE. Downtown PARKING can sometimes be an issue. However, if you’re willing to walk a few blocks, street parking is typically easy to find on the numbered avenues south of Broadway, or along Korean Veterans Blvd. Metered spaces are often free after 6 p.m.