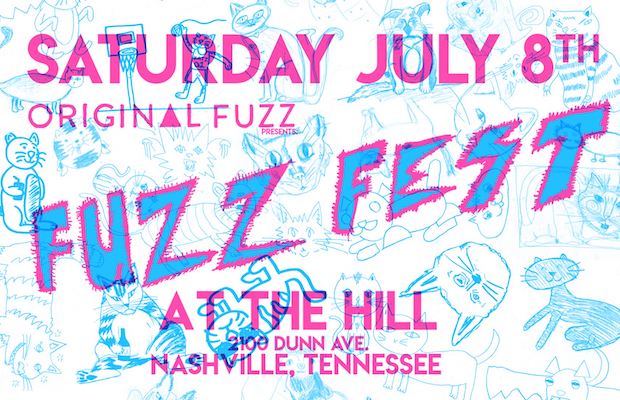 Fans of the ever thriving underground rock scene have a lot to be excited about this weekend, with the first ever Fuzz Fest going down today, July 8 featuring 14 fuzz-tastic bands from Nashville and beyond, plus DJs, food, vendors, and adult beverages. This event is hosted by Original Fuzz, and is being sponsored by NATIVE Magazine, Germantown Dental, Bearded Iris brewing, Espirito XVI Cachaça, PBR, Nelson’s Green Brier Distillery, The Riso Division, Oil and Lumber, Southern Lights Electric, and Grand Palace Silkscreen. The all ages, rain or shine event starts at 2 p.m., and it’s going down at the Original Fuzz music shop headquarters at The Hill (2100 Dunn Ave), next to the racetrack and Nashville  fairgrounds.

The massive line-up will be split between two stages, with scheduling playing out as follows:

There will also be DJ sets from Jem Cohen (of Fond Object), Dollar Bin Boys, and Hungry Hearts spliced in for good measure, as well as food/drinks from Bao Down Food Truck, summer beers by Bearded Iris, the La Croix Bar, Espirito XVI Cachaça, PBR, and Belle Meade Bourbon by Nelson’s Greenbriar Distillery. As if this still wasn’t enough, there will be art and clothing vendors, plus a silent auction brought to you by Germantown Dental, with 100% of the proceeds to benefit Buena Vista Elementary School. For just a $7 admission fee, you get a whole days worth of awesome, plus you’re helping to support the local indie scene. For more on the event, head here, and for a sample of most of the performers, click on after the jump. Hope to see you all there!

Catch Sweettalker, Trapped on Earth, & The Hollows | TONIGHT @ The Basement