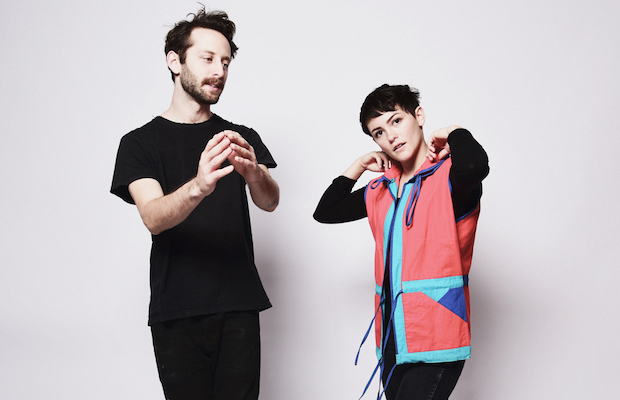 Out in support of their debut full-length and one of our favorite releases so far this year, Swear I’m Good At This, Upstate New York poppy, indie punk duo Diet Cig return to Nashville tonight, June 1 with kindred spirits Sports and locals Reality Something for a performance at The High Watt, sure to be one of the best shows of the spring for fans of earnest, emotional, raw, and unabashedly poppy DIY punk. We’ve seen the group a handful of times now, and can’t recommend experiencing them in person enough- their songs are amazing on their own, but are brought even more to life by the duo’s charisma and frenetic energy. Tickets are still available right here, so grab yours now and read on for more about the show!

Since first catching them at The End early last year, then being blown away by their summer performances at both Shaky Knees and Wrecking Ball, we’ve been pretty obsessed with Brooklyn by way of New Paltz, NY poppy, punk duo Diet Cig. Having recently wrapped a tour with local faves Daddy Issues, and celebrating their brand new, debut full-length, Swear I’m Good At This (which we’ve been spinning on repeat the past month), the band, made up of singer/guitarist Alex Luciano and drummer Noah Bowman, are experiencing their biggest wave of buzz yet- and for good reason. With an impossibly energetic live show fueled by Luciano’s infectiously positive energy and enthusiasm, backed by punk songs with fuzzy, pop hooks and hyper personal, earnest, feminist, and coming of age themes, Diet Cig are a pop punk band primed less for the Warped Tour and more for the DIY indie punk scene, definitely relatable and accessible for teen fans, but substantive and sincere enough to have the same emotional resonance for 20-somethings and beyond. The duo’s interplay is magnetic and their chemistry readily apparent, spilling over from recording to forge a competing performance, and one worth catching in High Watt-sized spaces while you still can.

Boasting an energetic, poppy flavor of punk not a far-shot from Diet Cig, Sports formed while all students at Kenyon College in Ohio, and self-released their first full-length, Sunchokes, in 2014. After drumming up buzz and landing on Father/Daughter Records, they crafted a followup, All of Somehting, in 2015, further honing their earnest, emo-tinged indie punk sound. After finishing school and being scattered about, the band, now based in Philly, had a bit of a delay in being able to tour in support of their latest, but now seem to be back on track and remarkably well-suited to support this show.

Since making a strong introduction in 2015 with their self-titled debut EP, local alternative/grunge pop group Reality Something, fronted by Elena Franklin and featuring Kingsley Brock (ex-Turbo Fruit), Ethan Place and Bill Grasely, have become a fixture in the Nashville rock scene, commanding a raw, powerful, enthralling sound. We’ve seen them numerous times, including at one of our own Acme showcases, and have been blown away with every performance. Show up early!