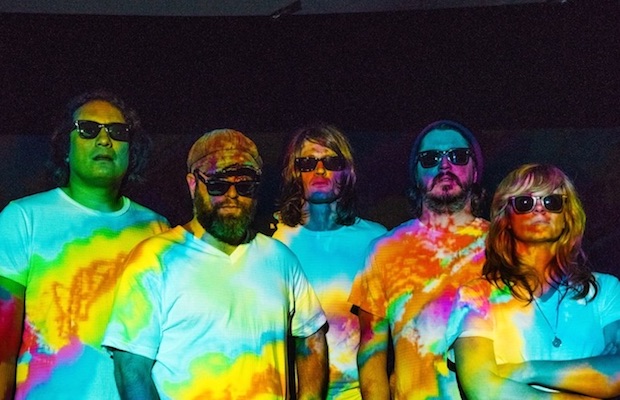 Music City, get ready to welcome back Austin based psychedelic fuzz rockers The Black Angels, who will be making their presence felt at The Basement East on Wednesday, April 26, just days after the release of their new album Death Song. With help from Brooklyn based, like-minded brethren A Place to Bury Strangers, this promises to be a skull melting good time, and you can still snag your tickets right here. Or, if you’d rather take your chances, we’re also giving away a pair of tickets to one lucky fan! Read on for more about the lineup, and enter for a chance to win below!

Channel everything you know and love about the ’60s and ’70s psychedelic rock movement, and press it through a modern Austin style filter, and you’ll start to get an idea of what The Black Angels are bringing to the table. Friday, April 21, the five-piece are dropping their highly-anticipated new record, Death Song, their first new LP in four years, and their most fully realized work to date. Written mostly before and during the 2016 election season, the tracks form an unparalleled soundtrack for what it means to be an American in this modern climate of division and anxiety. Equal parts protest, and emotional catharsis, Death Song is just the type of record we all need right now. Produced by Phil Ek (Father John Misty, Fleet Foxes, The Shins), the new LP is without a doubt The Angels’ most political record since their 2006 debut, Passover, and it was already hailed as “the most powerful album of the year” in an NPR roundup by KEXP’s John Richards. See what all the fuss is about for yourself, when they perform new material live, and get a heavy dose of the electric band’s back catalog too, when they make their hotly-anticipated return to town later this month.

Winner will be announced Monday, April 24 at 5 p.m. CDT, and will receive one pair of tickets. Good luck!

The Black Angels and A Place to Bury Strangers will perform Wednesday, April 26 at The Basement East. The show is 21+, begins at 9 p.m. (doors at 8 p.m.), and tickets are available to purchase for $20.