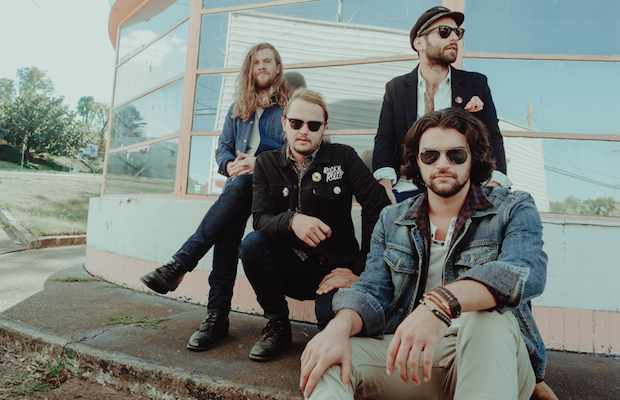 Formed only in late 2013, eclectic rockers Future Thieves have had quite the wild ride over the last few years, transforming from scrappy local upstart to viable national act, gracing the stage at events like Bonnaroo, Forecastle Fest, Live on the Green, and SXSW, as well as our own Acme showcase series, and packing clubs from coast to coast. All Nashville transplants, the quartet’s paths fortuitously crossed upon relocating to Music City, and, soon after forming the band, they were met with immediate local buzz, drawing praise for their first show at The Basement and strong early material. By their debut full-length, 2015’s Horizon Line, and thanks to the countless shows in the years leading up to its release, Future Thieves had become a formidable emerging act, fusing their versatile, old school, unpretentious rock sound and diverse influences with Americana flair.

Just a few months ago, the group released their first live album, Live at Blue Rock, which they recorded in Texas shortly after SXSW, and even more recently, the band unveiled “Sucker,” their latest single, ahead of a new album on track for the fall. The pop accessible, indie rock rooted tune has us even more eager for Future Thieves’ sophomore release, and you can watch their new video for the track below, then catch the group in action tonight, April 6 at 3rd and Lindsley with Guthrie Brown, as part of Lighting 100’s Tomorrow Is Today series! Tickets are available for just $10 right here.

Finally, ahead of tonight’s show, we’ve given Future Thieves the keys (or the password, as it were), to our Instagram account to do a daylong takeover, so be sure to follow along to see a day in the life of one of Nashville’s most promising rising talents!