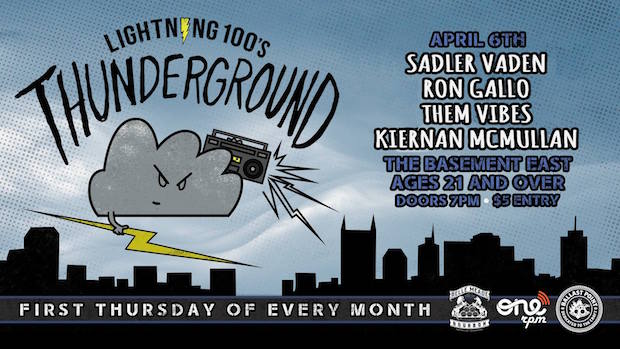 Lightning 100’s monthly Thunderground series continues tonight, April 6 at The Basement East, and features a stacked performance from some blog faves. Talented multi-instrumentalist Sadler Vaden, who honed his craft with Drivin’ N’ Cryin’ before joining up with Jason Isbell’s 400 Unit, broke out with a stellar solo debut LP last spring, and has been a hot ticket around town of late.  Speaking of hot tickets, Nashville via Philly rocker Ron Gallo dropped his phenomenal Heavy Meta earlier this year, and if it isn’t topping album of the year lists for 2017, there is something morally wrong with the world.  Rising local rockers Them Vibes are gearing up to release their second full-length, and have been gaining traction for that release with the catchy-as-hell title track, “Electric Fever,” that has been in steady rotation on Lightning 100.  Kiernan McMullan, who is set to release his new record on Friday, will be opening things up with a great chance for fans to hear new music from Baggage.

Thanks to some fine sponsors like L100, Ballast Point Brewing, The Basement East, Belle Meade Bourbon, and OneRPM, you get to see all of this talent for only $5, and will enjoy drink specials on top of it all.  If you need a primer in some of the best in our local rock scene, this show is a perfect way to get informed.

Sadler Vaden, Ron Gallo, Them Vibes, and Kiernan McMullen will perform tonight, April 6 at The Basement East. The show is 21+, begins at 7 p.m., and tickets are available for $5.