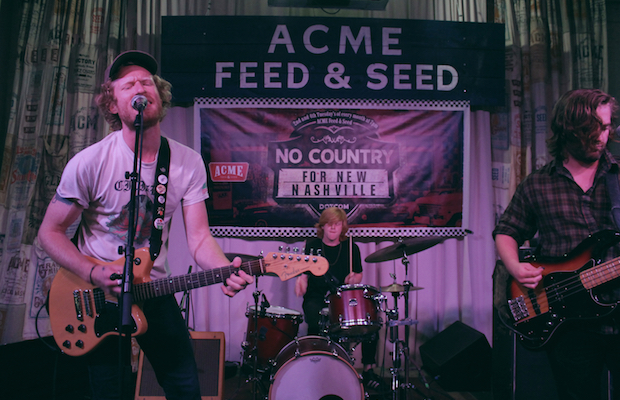 Our long-running, free, bi-monthly Acme Feed & Seed showcase series was loud and eclectic on March 28. For our latest installment, we were pleased to welcome grunge rocker Charlie Abbott and reggae-influenced performer Mike Ferrera, plus we kicked the night off with DJ Preston holding down the booth. Read on for a full recap of all the action, and check out some great shots from Acme’s house photographer Preston Evans.

Wondering down 1st Ave towards Broadway, enjoying the pleasant weather, I took some extra time to soak in the cityscape I’ve come to know and love. The hustle-bustle of downtown, even on a Tuesday night, was in full swing. No doubt there were any number of events going on simultaneously (in addition to our Acme showcase) that added to the din. As if on cue, one set of industrial strength fireworks were launched from Nissan stadium across the river. No telling why or what for, but my guess is it was just a practice run. 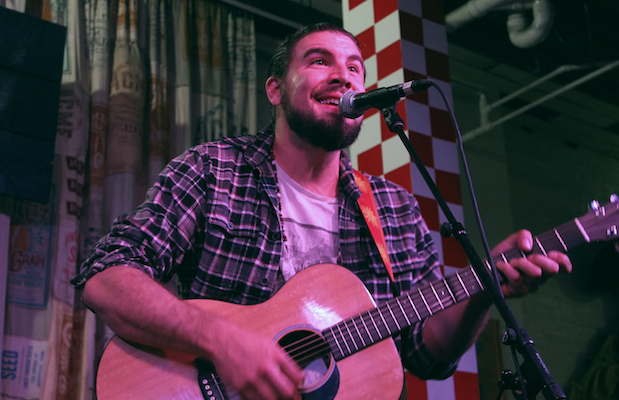 With tunes spinning from DJ Preston on the house mix, I got comfortable at the bar and ordered some Redneck Lo Mein. Just as I finished my meal, it was time for our first performer to take the stage. Mike Ferrera has graced our showcase at Acme before, and we liked his set so much, we decided to have him back. Opting to keep it striped down this go ’round- last time he had several people on stage with him- Mike did a mostly solo acoustic set, with some bongos in accompaniment on a few tracks. Another member of the growing Tennessee Reggae movement (read here or here),  he kept his mellow irie vibes going through out his set, slapping out some rhythm on his guitar when he deemed it necessary. Ferrera played a generous helping of his latest EP,  See You Smile, and there was the standard marijuana friendly number you knew would flow from a Rasta influenced singer. His wonderful voice and island rhythms were a nice change of pace at our showcase, which we always try to keep as genre diverse as we can. 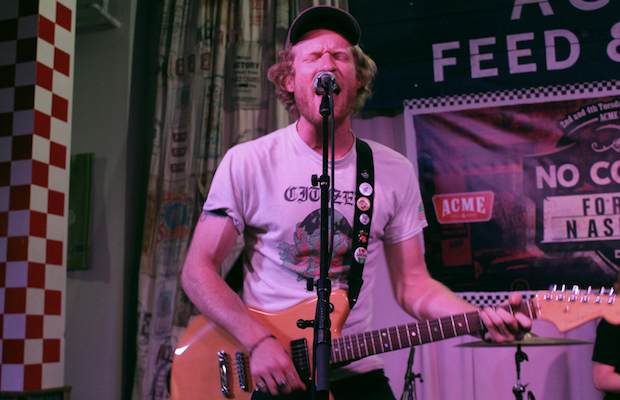 Next up was a local guitar player we’ve seen make the rounds with various promising local bands like The Cunning, Bad Cop, and OJR. However, these days it’s all about personal growth and musical development for Charlie Abbott. He’s released solo stuff before, but never has he been more focused on his own mission than with his latest offering, and his second in a calendar year, Technicolor Dream. We’ve dug everything he’s done up to this point, so when we heard the new record, we knew we had to book him. He would not disappoint.

Heavy and sludge rich from the start, Charlie brought the rooms energy level up from a solid 6 to about a 50 by the end of the first song. With power garage rock riffs, pushed through grunge effects pedals, and a gravelly, Kurt-Cobain-strained voice, the powerful trio were as load as any act we’d ever booked… and I loved it. He was twice as raw live, as he was on the recorded stuff. Thanks to the muddy guitar, the crowed seemed a little shell shocked at first, but by the third song everyone was good and primed, transplanted into the best parts of ’90s alt rock, albeit with a modern edge. Helping his cause, Abbott had some funny stage banter in-between songs, showing just enough bravado, balanced with a self-deprecating sense of humor. Highlghts included a Nirvana cover of “Drain You,” an original I really liked entitled “South Pacific Tour,” and some killer extended jams that highlighted his supreme talent. By the end, I was blown away, and I’m eager to see more from Charlie in the future.

Enjoy a few shots form Acme house photographer Preston Evans below, and be sure to join us Tuesday, April 11 for music from BRUNS and Easy Roscoe.