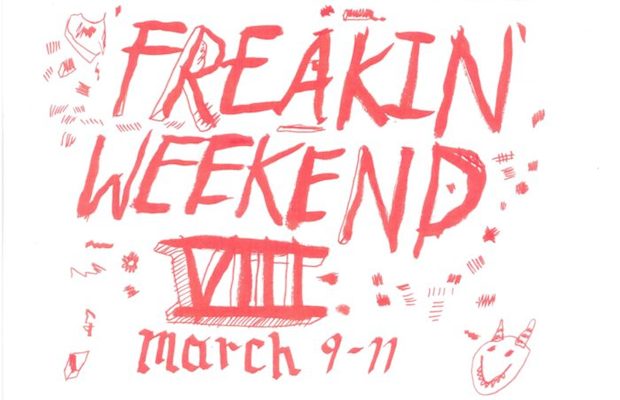 Founded as a humble, DIY, single-location festival by the fine folks at Nashville’s Dead, the annual Freakin’ Weekend fest helped propel Nashville’s underground punk scene to national relevance, growing, over the years, to a multi-venue, multi-day showcase of the best of local and national punk, indie, garage rock, hardcore, and more. Announced last month, this year’s eighth installment, set to run tonight, March 9 – 11, will, sadly, be Freakin’ Weekend’s last. Dubbed “the last fucking weekend,” it feels like a worthy end, skewing heavy on local talent and returning performers from over the years, for a comparatively scaled-down event compared to the last several. While this might be the last Freakin’ Weekend in name, the event’s current organizers plan to keep the spirit alive in some form or another, albeit without the weight of a festival, which, over nearly a decade, has very much morphed into something else in meaning and function.

Though not without hurdles and controversy, including some heading into this year (we’re not informed enough on the issue at hand to elaborate, by the way; that’s not meant to be cryptic), the impact that Freakin’ Weekend, Nashville’s Dead, and the people involved have had on the growth and scene-building in Nashville has been immeasurable. It’s true that some of the scrappy punk spirit of its earlier days has been lost, but watching bands grow with the fest to become prominent, nationally-known artists has, in its own way, been incredibly rewarding to witness.

As Freakin’ Weekend comes to a close, artists like Diarrhea Planet, Daddy Issues, Jawws, Jacuzzi Boys, Ranch Ghost, and Music Band return to say goodbye, performing over three evening showcases (single venue this year, as opposed to the two-venue setup in recent years) at The End and Exit/In. The evening events are individually ticketed, and both nights at The End are all ages (Exit is 18+). Below, find details, ticket links, artists previews, and more, and get ready for one final, fucking Freakin’ Weekend.

No official pre-shows this year, and no Thursday day show, but Thursday evening is still a strong start at The End. Miami’s Jacuzzi Boys have a long-running history with the fest, and, certainly, have grown tremendously in prominence over the last several years, so they’re the perfect choice for a night one headliner. Rooted in garage rock, the band’s versatile style and fantastic live presence has only grown more fun and refined over the years. Disco-addled, boogie rock locals Savoy Motel bring a considerable less punk but super cool flair to the mix, and psych rockers The Paperhead, primed to break out with their latest LP, Chew, open things up!

We were super sad last summer with young, local punk outfit Jawws abruptly disbanded, so their just as sudden return for Freakin’ Weekend (potentially a one-off; we’re not sure if this could lead to more shows) should be reason enough to make it out Friday night. Taking a cue from ’80s hardcore, those dudes sincerely rip, and their live show is primed for a packed, mosh-friendly spot like The End. The rest of this bill is just as strong (and a great local spread), with psych-tinged garage rockers Ranch Ghost in the top spot, and fuzzed out Infinity Cat fixture Music Band bringing the local vibes as well. After the cancelation of Friday’s day show, Silk & Suede and Andy Ferro, who also plays in Ranch Ghost, but makes low-key rock on his own, have also joined Friday night’s lineup. Saturday night might be a little flashier, but if you’re looking for the best concentration of attention-grabbing local talent, Friday might be the best bet all weekend.

In the last showcase of the last ever Freakin’ Weekend, no band could be better suited to give the fest a final goodbye than Diarrhea Planet, who’ve been around the whole time, have grown parallel to fest (they started as a sort an in-joke noise band, and are now a powerful force in the national rock scene), and have surely played it as frequently as most anyone. Their epic, four-guitar, anthemic party punk sound has elevated them to local legend status, and some of their best shows in town have been at Exit/In, several as part of past Freakin’ Weekends. With Atlanta lo-fi, poppy post-punk outfit Omni, and local grunge pop trio Daddy Issues, who, like DP, are on Infinity Cat, are a pretty to release a new full-length, this feels like a fun, fitting end to a beloved, long-running, integral part of the local music scene. It also appears that Clearance and Dream Wave are most likely on the bill, but with schedule shakeups, we’re a little unclear on the final lineup. If you can only make one night, though, obviously this is the one that offers true closure and a chance to rage one final time.

Find out more about Freakin’ Weekend VIII here and here.