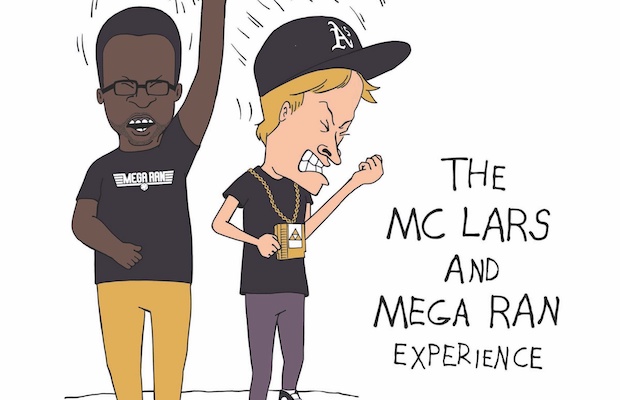 Nerdcore, nerd rap, laptop rap, whatever you want to call it, there’s no denying that both MC Lars and Mega Ran have been instrumental figures in their flourishing hip hop subgenre for more than 15 years. Hailing from Berkeley, Calif., Lars, equally a fan of classic literature as modern pop culture, forged his unique sound by fusing elements of post-punk and emo to inform his sharp, smart, and often funny style. Iggy Pop-sampling 2006 single “Download This Song” and Piebald-sampling “iGeneration” might be among his best known tunes, and, for many years, he’s weaved between the punk scene at events like Warped Tour, and the more traditional hip hop scene, flexing his legitimate musical chops and polished delivery. Mega Ran, formerly known as Random, came up in the underground hip hop scene in Philadelphia, his sound and style informed by a love of video games (hence the stage name), pop culture, and chiptunes. Formerly an educator, Ran retired to pursue music full-time a few years back, and, like Lars, both helped influence the nerdcore scene as a whole, and have benefitted from its rise in recognition (famously, both participated in a diss track against Jeopardy host Alex Trebek last year after he poked fun at the subgenre).  Sure, their music is best appreciated if you love movies, video games, comic books, the emo scene, and literature, but lyrical content aside, both MC Lars and Mega Ran are impressive rappers in their own right, and their return to Nashville tonight, March 7 for an all ages show at Rocketown is going to be a blast!

MC Lars and Mega Ran will perform tonight, March 7 at Rocketown’s White Building. The show is all ages, begins at 7 p.m. (doors at 6 p.m.), and tickets are available to purchase for $12.