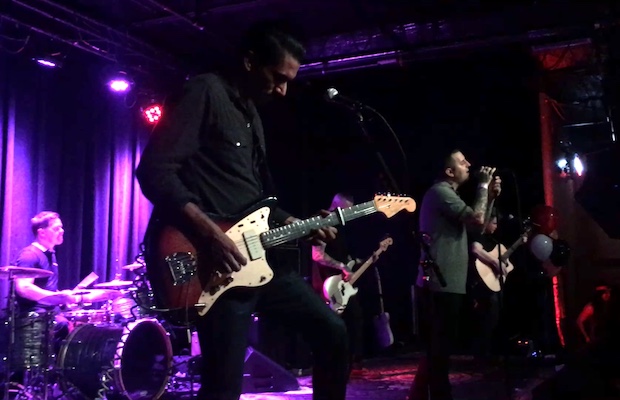 Over the weekend and as we detailed in advance, local punk/indie/emo DJ night Nashville Is The Reason celebrated their second anniversary in style, hosting a Punk Rock Prom at The Basement East, featuring typical DJ fare as well as two cover band sets. The closing act, locals Crucial Bros, delivered your standard party-starting, rock-fueled performance of ’80s hits; a lot of fun and certainly everything you’d expect from a solid cover band. However, it was the evening’s first act, Smiths tribute group Louder Than Bombs, who wowed us not only with the quality of their set, but with the pedigree of everyone involved.

Featuring Bayside frontman Anthony Raneri and guitarist Jack O’Shea, Saves The Day guitarist Arun Bali, former Street Dogs bassist Tobe Bean, and Hey Mercedes/Braid drummer Damon Atkinson, Louder Than Bombs are a certifiable punk rock supergroup, and one that would, without a doubt, be grabbing a lot of headlines and a prominent slot if they were performing at a festival like Riot Fest or Wrecking Ball. All local residents, the show seems to have just been a one-off (though we really, really hope the door could be open to doing this again), as a fun way to celebrate Nashville Is The Reason and to pay tribute to a group Raneri called their collective favorite band.

With a generous set of covers of “Panic,” “This Charming Man,” “Big Mouth Strikes Again,” “Ask,” “The Boy with the Thorn In His Side,” “Please, Please, Please Let Me Get What I Want,” “Heaven Knows I’m Miserable Now,” “How Soon Is Now?,” “There Is a Light That Never Goes Out,” and more, Louder Than Bombs led a packed room in sing-along after sing-along, their love for the material palpable and infectious.

We hate to be that guy recording full songs at shows, but with an experience this cool and unique, we just had to capture a few moments to share. Below, check out three full performances from the first (and, possibly, only) Louder Than Bombs show!

Annalia Turns Down the Temperature With Pop Debut Single "Jealous"