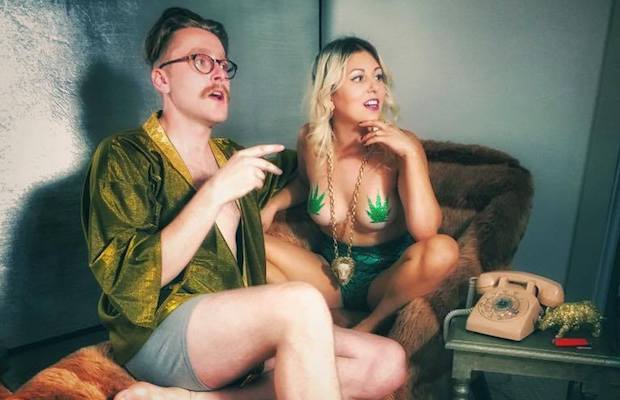 Made up of singer Molly Rocket and drummer Atticus Swartwood, a pair of Wesleyan University graduates who relocated to Nashville to pursue music, Molly Rocket is a project on the rise you should definitely have an eye on. The group are set to play The Cobra this Monday, Jan. 16, along with The Medium and Creature Comfort, in celebration of the official release of their new music video for “Friction (Dat Booty Doh).” We’re thrilled to bring you a surprise premiere just a few days early, however, so you can see what’s in store for what’s sure to be a wild show.

Dubbed a “feminist party anthem,” the track is an unabashed celebration of sexuality, and decked out in pot leaf pasties, fierce frontwoman Molly Rocket balances a tongue-in-cheeck sense of humor with a strong social dialogue. Describing the song, she tells us “Don’t know about you, but most of the women we know want to have sex just as much as the men, if not more. The desire for sexual contact is an innately human thing – we all want it – we all NEED it sometimes – why create all these stereotypes around what sexual desire means? All that does is make it harder for EVERYONE TO GET LAID!!! We’re pretty sure no one wants that. We know this is not a new idea, but as long as it’s still a problem, we’re going to to keep screaming about it.”

Watch the video below, which was directed by Mike McGraw and Derek Batt, and shot in at least one location that should be very familiar to all east siders.