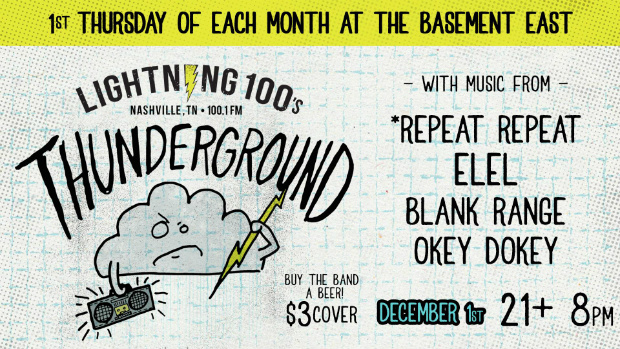 Lightning 100 continues their well received Thunderground series at the Basement East tonight with a handful of local bands that most readers of this site should be incredibly familiar with.  Longtime blog faves *repeat repeat, ELEL, and Blank Range will be joined by upstart psych pop outfit Okey Dokey for what feels almost like a mini East Nashville Underground reunion.  The real beauty of this event, you can get in for a mere $3.  So, dig up the change between your couch cushions, and head out tonight to support some of the best in our local scene.

Local candy-surf rockers *repeat repeat have been building anticipation for their upcoming sophomore LP, Floral Canyon. They have been teasing us with singles, like “Mostly” and their politically charged video for “Plugged In” from that record, and the rising rockers have been touring heavily for the past few months to promote the follow up to their impressive 2014 debut, Bad Latitude, which found its way into our Top Local Records of 2014 poll.  With all of the touring, *repeat repeat don’t find themselves playing around town too often these days, and this, their final show of 2016, will mark their first local performance since Halloween night (which nicely followed up their incredible Live On The Green set).  They already have a fairly packed tour schedule in 2017, so make sure you catch them tonight.

Local indie popsters ELEL have been on our radar since their first show, which took place at the now-defunct Stone Fox, and we have watched them grow from a group of talented local artists to a nationally recognized band, who caught the attention of Mom + Pop Records with uber catchy singles like “40 Watt” and “Kiss Kiss.” They just released their long awaited debut full length Geode earlier this fall, and have been touring in support of that release since.  They are back in Nashville tonight for a hometown performance, and, if you haven’t seen ELEL in a while, it’s time for you to get out to see what all of their time on the road has done to their live set.

Long time stalwarts of the local music scene, Blank Range found time amongst a heavy tour schedule over the past few years, to drop a somewhat surprise EP Vista Bent last month.  The new EP features more of the rock & roll spirit that caught our attention in their 2013 Phase II EP, but it also shows how Nashville has rubbed off on the midwest transplants with steel guitar embellishment and whiskey soaked vocals.  Blank Range’s live show is always a tour-de-force, and this will be a great chance for you to hear tracks from the new record.

We just announced earlier this morning that upstart psych pop outfit Okey Dokey is gearing up to release their debut LP in early 2017, and shared their latest single “Congenial Man,” which just dropped last week.  If you aren’t hip to Okey Dokey yet, you should change that immediately, because we foresee a big year for the songwriting duo of Johny Fisher and Aaron Martin.  They expertly blend soulful retro pop through a psychedelic blender, definitely representing a fresh sound in Music City, and based on our early listen to the upcoming record, they didn’t pull any punches for their debut.  If you are a fan of the quirky fresh sounds of bands like Whitney, Okey Dokey is probably about to be your favorite new local band.

*repeat repeat, ELEL, Blank Range, and Okey Dokey perform tonight, Dec. 1, at The Basement East. The show is 21+, begins at 8 p.m., and tickets are available for $3.