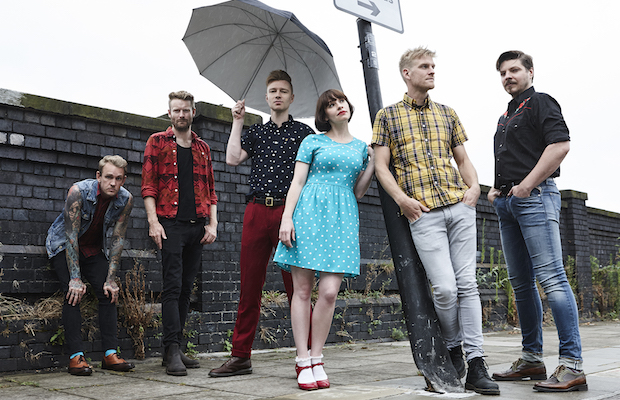 Though they just made a memorable stop at the original Basement earlier this year, British folk punk outfit Skinny Lister have since released their excellent third full-length, The Devil, The Heart and the Fight, and are making a quick return, this time to The Basement East, in celebration, tonight, Nov. 15 along with a stacked lineup of Lincoln Durham and Trapper Schoepp. Tickets for what’s sure to be one of the fall’s best shows, as all three acts are hailed for their live performance, are available here, so grab yours now and read on for details below!

Once crowned “the hardest working band in the UK,” English folk punk sextet Skinny Lister spent their early years constantly independently touring and honing their craft, amassing international acclaim ahead their 2012 debut full-length Forge & Flagon. Originally a five piece (they later added a drummer), the group’s sound lands somewhere between the territory of folk punk singer-songwriter (and fellow Brit) Frank Turner and two acts they’ve shared the stage with: Dropkick Murphys and Flogging Molly. Rather than jumping on the trendy folk revivalist bandwagon, however, Skinny Lister call back to older, more traditional stylings, and fuse that heritage with faster, more aggressive, and modern sensibilities, all held together by a lyrical earnestness and air of sincerity that few bands can match. Co-fronted by Daniel Heptinstall and Lorna Thomas, the group have become staples of the festival scene, and have shared the stage with countless punk and folk heavyweights. Celebrating the release of their new, third full-length The Devil, The Heart and the Fight, the group seem poised to transcend their punk niche and perpetual support act status to become a certifiable household name, and their revelrous, earnest, and unparalleled live show is one you absolutely need to witness in person.

Self-described as a “Southern-Gothic Psycho-Blues Revival-Punk One-Man-Band preaching the good word of depravity,” Texas troubadour Lincoln Durham has carved a niche unlike any other artist making music today. Raised in the Lone Star State as well as New Jersey, Durham’s love of music began when he took up fiddle at a young age, before later transitioning to guitar electric guitar after getting into alternative rock in high school. Since his 2010 debut EP and subsequent trio of full-lengths, most recently this year’s Revelations of a Mind Unraveling, Lincoln has earned a following thanks to his haunting, personal, and poetic writing style and genre-bending, blues-rooted, eclectic and organic sound. As much like Jack White as he is Nick Cave, Durham’s live show is what makes him even more unique, employing a host of instruments, some homemade, and every appendage to bring to live his personal and imaginative art.

After generating buzz with 2012 debut Run, Engine, Run along with backing band The Shades, Minnesota born, Wisconsin based singer-songwriter Trapper Schoepp opted to take the solo route for his latest, Rangers & Valentines, recorded right here in Nashville with Brendan Benson, and featuring guest appearances from the likes of John Davis, the McCrary Sisters, and even Marc Maron. Conjuring a sound that wavers between pop accessibility, story-driven rock, and punk authenticity, Trapper has already shared the stage with acts like The Wallflowers and Old 97’s, and thanks to his genre-bending sensibilities, makes for a perfect fit on a variety of shows, including this one.