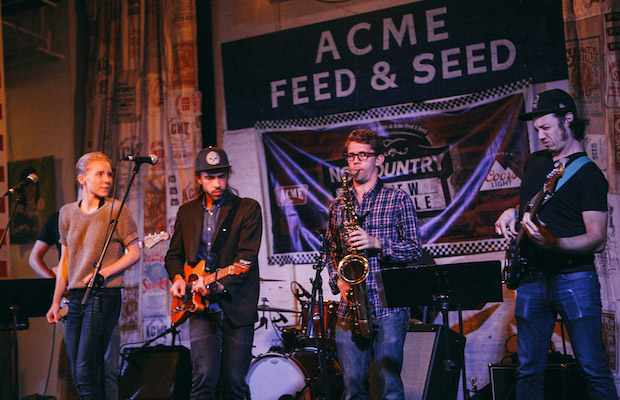 Our long-running, free, bi-monthly Acme Feed & Seed showcase series is still going strong into the fall, and our latest installment rocked out on Oct. 11 with some very unique flavors. We were pleased to welcome soulful singer songwriter Devon Gilfillian, indie garage rockers The Medium, and genre bender Mountainwalker. Read on for a full recap, and check out some great shots from contributing photographer Amber J. Davis.

Arriving downtown early for a change, I found myself with enough time to actually find a decent parking spot close to Acme; a rarity given how busy Broadway has regularly become. Walking to venue, I couldn’t help but notice that the vast majority of downtown tourists had gathered at the far end of the strip. The street was also blocked off, all for the iconic honky tonk Tootsies’ birthday bash. Despite this, I was surprised at how packed Acme was, which just goes to show that the word is out, and people will flock to the Feed & Seed no matter what else is going on around town. 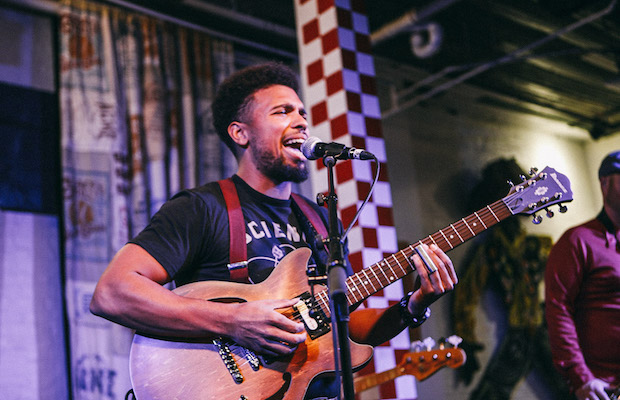 After getting halfway into my first beer, it was about time for Devon Gilfillian to start his set. He trotted out one of the bigger band of performers we’ve ever had in our showcase. Featuring three backup vocalists, brass, keys, drums, bass, a nasty lead guitarist, as well as the man himself singing/strumming, the ensemble brought a massive sound that filled the room, commanding our attention. The singers were pitch perfect, balanced with one another, and the blues inspired slide guitar from the lead was mesmerizing. Devon wasn’t afraid to mix it up either, sending the rest off stage to pick a beautifully crafted song solo on his acoustic. Once the band returned, he also showed he was no slouch on electric either, busting out his own finger slide, and shredding some nasty blues riffs himself. As they powered on through their set, they even showcased some improvisational abilities, jamming out here there when it seemed to fit. It was a very impressive introduction to an artists I’m going to be keeping an eye on. 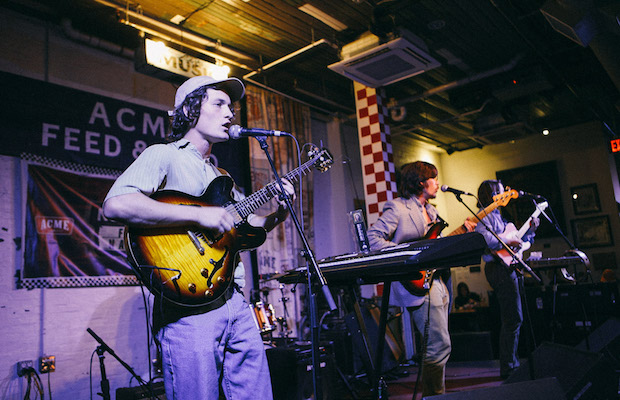 Next up were a group of local rockers who are fairly new on the scene, at least as this incarnation, which they’ve dubbed The Medium. The sound that immediately came to mind when they’d gotten about halfway through the first or second song is the band Real Estate. The Medium have a similar, effortless, chilled out vibe to their shoegaze-y indie rock arrangements. However, their vocals are more a surf punk meets the Beach Boys sound, than Real Estate’s dream pop half-whispers. They also have an overall, stoner quirkiness about them as well, with random stage props laying about, including a VHS copy of Mel Gibbson’s Braveheart standing up on their keyboard. They could also slip into neo-pyschedelia, like they did on the super vibey “Have a Happy Day,” one of my favorites from their very tasty set. Extra points for offering their cassettes for sale as part of a ten-year-old’s birthday style goody bag. Their closer “Fade Away” was also badass, and I can’t wait to hear more form a band that is still just starting out. 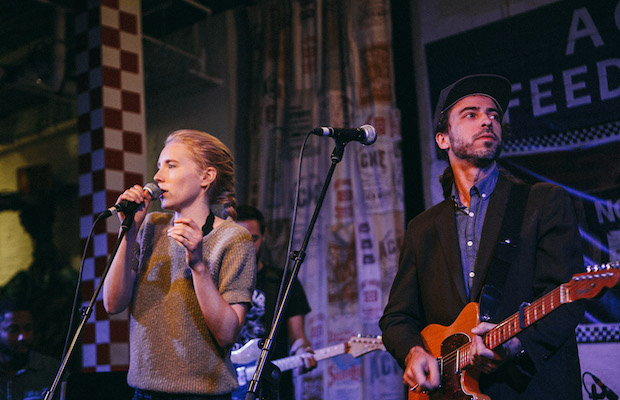 Closing out the evening of music was a return of a favorite from one of earliest Acme showcases. Mountainwalker was part of a bill way back when our little venture was still really just starting to get going (read this post), and based on that performance, and what we’ve heard from the collective since, we were super stoked to welcome them back. MW’s sound is hard to pin down. It started off as ambient r&b, with sexy saxophone. Layered over that was frontman Aaron Berg’s spoken word style lyrical delivery, which played nicely off his more traditional backup singer. His low, monotone voice reminds me of The National’s Matt Berninger, but his cadence is more of a rap than actual singing. Heavily layered with the large ensemble cast behind him, the effect was very unique, with a chilled out lounge act appeal. The song he sang about living in Brooklyn as an underage kid, and paying money at neighborhood house parties to drink rum and cokes, also had a Kurt Vile storyteller aspect to it that was very cool. By the time they’d finished, I found myself looking up their discography, so I could get up to speed with yet another local band that is doing awesome things in new and exciting ways. While you’re here, enjoy some great photos from contributing photographer Amber J. Davis, and be sure to check back for more details on our next Acme showcase.