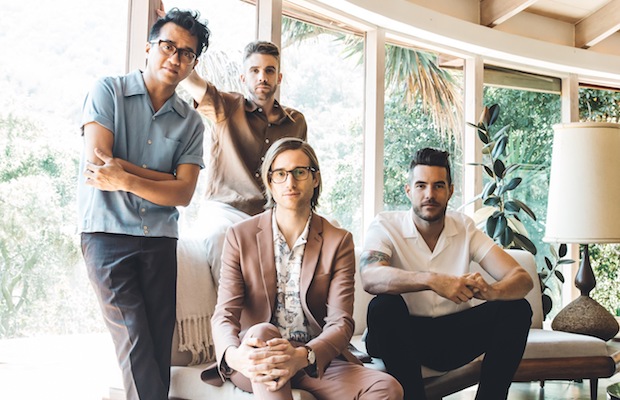 On the heels of their highly-anticipated new album saintmotelevision, breakout LA indie rockers Saint Motel are set to return to Nashville for their first local headlining show in a few years on Tuesday, Oct. 25 at Cannery Ballroom! Hailed for their immersive, cinematic, and artistic live show, Saint Motel are definitely best experienced live, and with buzzy group Hippo Campus and up and comers Weathers rounding out the bill, this feels like a must-see fall lineup. Tickets and meet and greet packages are still available here, but we’re also giving away a pair of tickets to one lucky fan! Read on for more about the lineup, and enter below.

Frontman A/J Jackson and guitarist Aaron Sharp formed Saint Motel in 2009, after meeting in film school in LA and quickly bonding over similar taste in music, cinema, and art. Rounding out their lineup with bassist Dak Lerdamornpong and drummer Greg Erwin, the group found early buzz thanks to their debut EP, ForPlay, further fleshing out their artsy, indie, pop-accessible sound with 2012 full-length debut, Voyeur. Based on the strength of their live show, and a persistent commitment to enhancing their music with a strong visual backbone, video content, and immersive performances, and fueled by tons of positive press, Saint Motel inked a major label deal ahead of 2014 EP My Type, and, thanks to the breakout success of its title track, soon found swift worldwide popularity. Over the past few years, the rising rockers have toured with big names like Weezer, Arctic Monkeys, and Imagine Dragons, played fests such as Bonnaroo, Pilgrimage, and Firefly, and have scored numerous film and television placements, all the while getting more adventurous and immersive with their stage show. The group’s sophomore LP, saintmotelevision, due out Oct. 21, promises to further intertwine the band’s love of visual flair and their eclectic, accessible, and substantive sound, with an early crop of tracks (and accompanying 360° “Virtualizer” videos), landing as some of Saint Motel’s strongest material to date. The fact that they’re headlining is a testament to the group’s recent ascent, and with brand new material to debut live, there’s never been a better time to catch them!

Winner will be announced Monday, Oct. 25 at 5 p.m. CDT, and will receive one pair of tickets. Good luck!