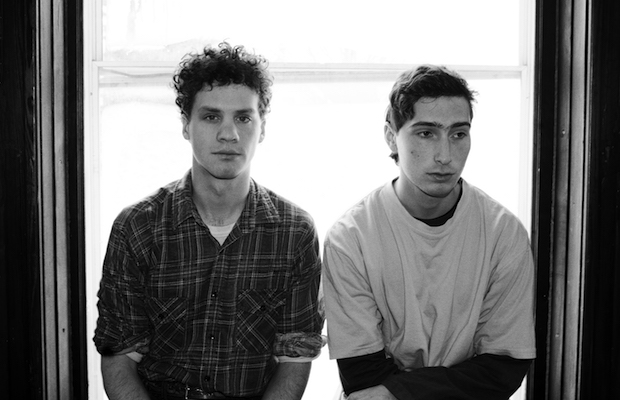 We get it, Mondays are rough. But tonight, Nashville’s beloved Exit/In is giving us a chance to fight those Monday blues with the power of music. Stopping by the Elliston Place hotspot is one of our favorite new Chicago bands Whitney, who will be joined by four-piece dream popsters Hoops and indie pop outfit EZTV. Tickets are $18, so grab them in advance for the 9 p.m. show.

We have a full preview on the bill for you below. There is no doubt that you will be absolutely impressed by the great vocal talents and engaging melodies appearing on the Exit/In stage. So see for yourself by getting to know the bands and arriving on time for the full experience these groups have to offer

Whitney have wasted no time since their inception last year. We reported on them during Bonnaroo season and we are very excited that they are already coming back to town. Formed by Max Kacacek of Smith Westerns fame and Julien Ehrlich who also toured with Unknown Mortal Orchestra, the group released their debut album Light Upon The Lake this June to outstanding critical acclaim, including a coveted “Best New Album” nod from Pitchfork.  The band have been busy since, playing some of the best music festivals in the country, including Roo, Outside Lands, and Governor’s Ball.

The group’s style takes the best parts of the indie folk movement and throws in a generous potion of hearty soul music to top it off, and Light Upon The Lake is a collection of  ten fervent compositions that reflect the songwriting styles of Jackson Browne and Curtis Mayfield. Max Kacacek’s voice shines with a bright and enlightening presence that reminds us of Robin Pecknold and his majestic folk band Fleet Foxes. Complete with ethereal orchestration of horn instruments, the entire record manages to soothe and motivate all at once. This is a style that the band has honed in on and made their own, and we are so excited for another chance to see the live performance of some of the strongest songs of the year. Get acquainted with their single “No Woman” below to become just as pumped as we are.

Bloomington, Indiana four piece Hoops embody everything inside the dream pop stratosphere. What started as frontman Drew Ausherman’s solo project grew into a full-fledged band by 2014, and the group started out by releasing a couple of mixtapes that gained heavy notoriety on the underground circuit. In the beginning, the band honored that underground appreciation by  retaining somewhat of a mysterious aura, but that has all started to change with their recent breakthrough. Upon signing to Fat Possum Records they finally released their official debut EP in August of this year, and their two mix-tapes were also put on the internet then for everyone to enjoy. These releases show that the band draws from a wide variety of influences, such as DIIV, Prefab Sprout, and Ariel Pink, to achieve their mystical sound such, and it will be interesting to see how this all transfers into a live atmosphere.

Starting the night off will be New York power pop group EZTV. The trio just released their second full-length record entitled High In Place on Captured Tracks, and it is a collection of jangly pop rockers that have kept our heads bobbing all week long. It is full of energetic guitar strumming well crafted hooks, and solid drumming that give each song a strong foundation. The record also features guest spots from some of our favorite artists like Jenny Lewis. We are very excited to see what this band has in store for us tonight. Check out a sample below!